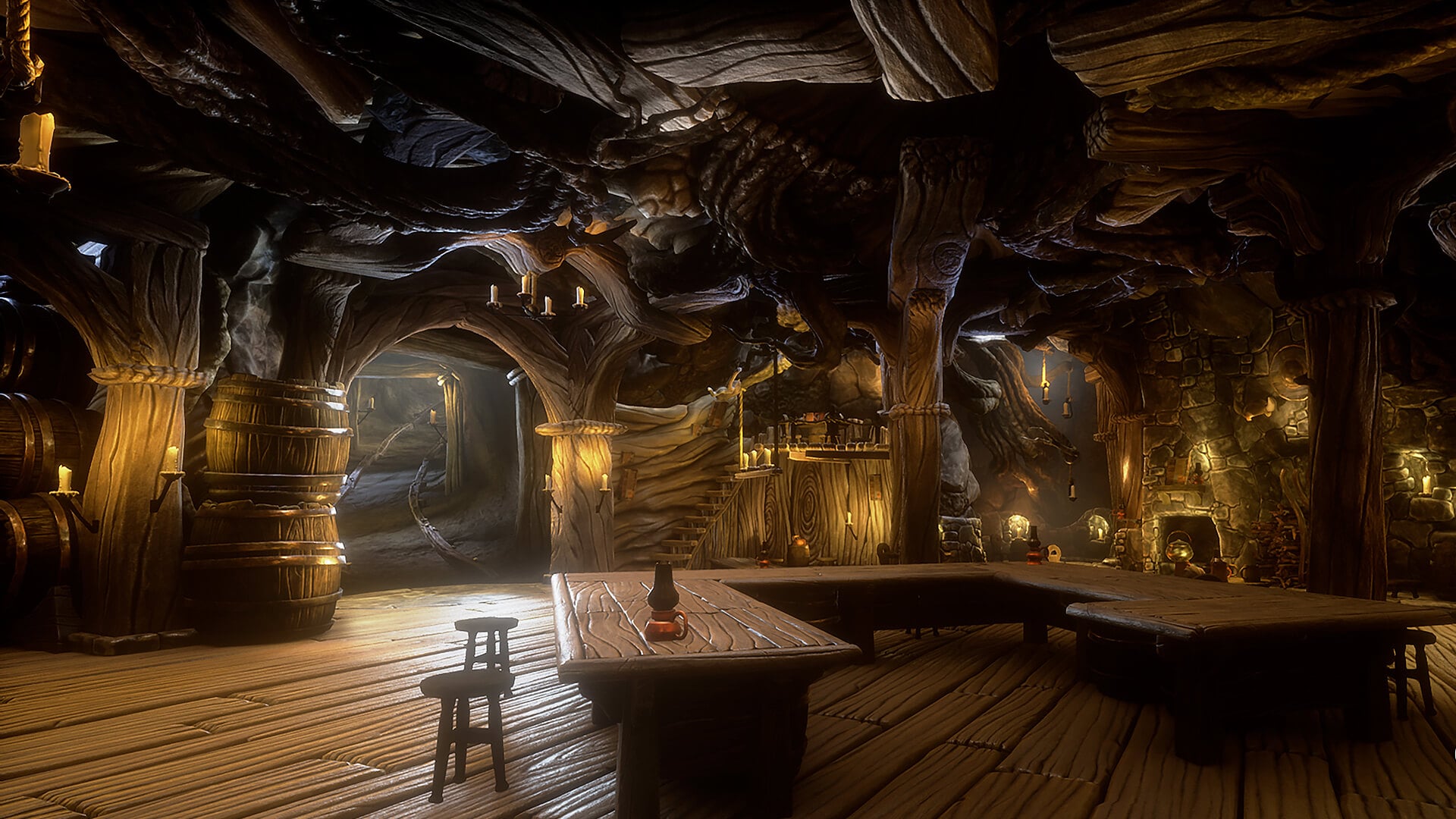 Between them, Favreau, Rowell, and Spiteri boast an incredible portfolio of leadership credits on hit films, games, and TV series, including The Lion King, The Jungle Book, the Iron Man trilogy, Chef, The Mandalorian, Final Fantasy IX, Final Fantasy: The Spirits Within, Superman Returns, Call of Duty, Apollo 13, Terminator 2: 3D, and Medal of Honor.

Gnomes & Goblins is a fantasy adventure VR game that uses AI to connect the player with the characters and the world they inhabit. “We think of it as a simulation more than a game,” says Spiteri. “It’s an invitation to you, as the player, to go on this journey, guided by this goblin called Buddy, and really become part of this dreamlike, enchanted fantasy world.”
The team has been working on the project for five years, releasing a preview in 2016, and the full product in September 2020. It has since built up a loyal fan following, and received many glowing reviews, with Kent Bye from Voices of VR describing it as having “some of the most exquisite world-building” in VR.

Gnomes & Goblins was the first project at Wevr to use Unreal Engine, although some of the team members had been using it for over a decade, and the engine has now become the company’s primary development platform. Key features that contributed to its selection were its Blueprint visual scripting system that enables even non-programmers to create scripts simply by connecting nodes, and its free access to the full source code, which means that not only can the team better understand how the engine works and diagnose behavior or performance issues, but they can also tailor the code to their specific needs.

“Unreal is very flexible and feature rich,” says Rowell. “It is much faster to prototype new features in Unreal Engine using Blueprint—which was ideal for Gnomes & Goblins. It's great to be working with an engine you can dig into, understand, and augment.”

“Unreal Engine enabled our artists and designers to craft the world of Gnomes & Goblins out of the box,” adds Technical Director Scott Reeser. “Source code access, coupled with the scriptable build systems, enabled our engineering team to reach the look-dev goals the Art team was striving for as well as make specific optimizations based on our asset sets.” 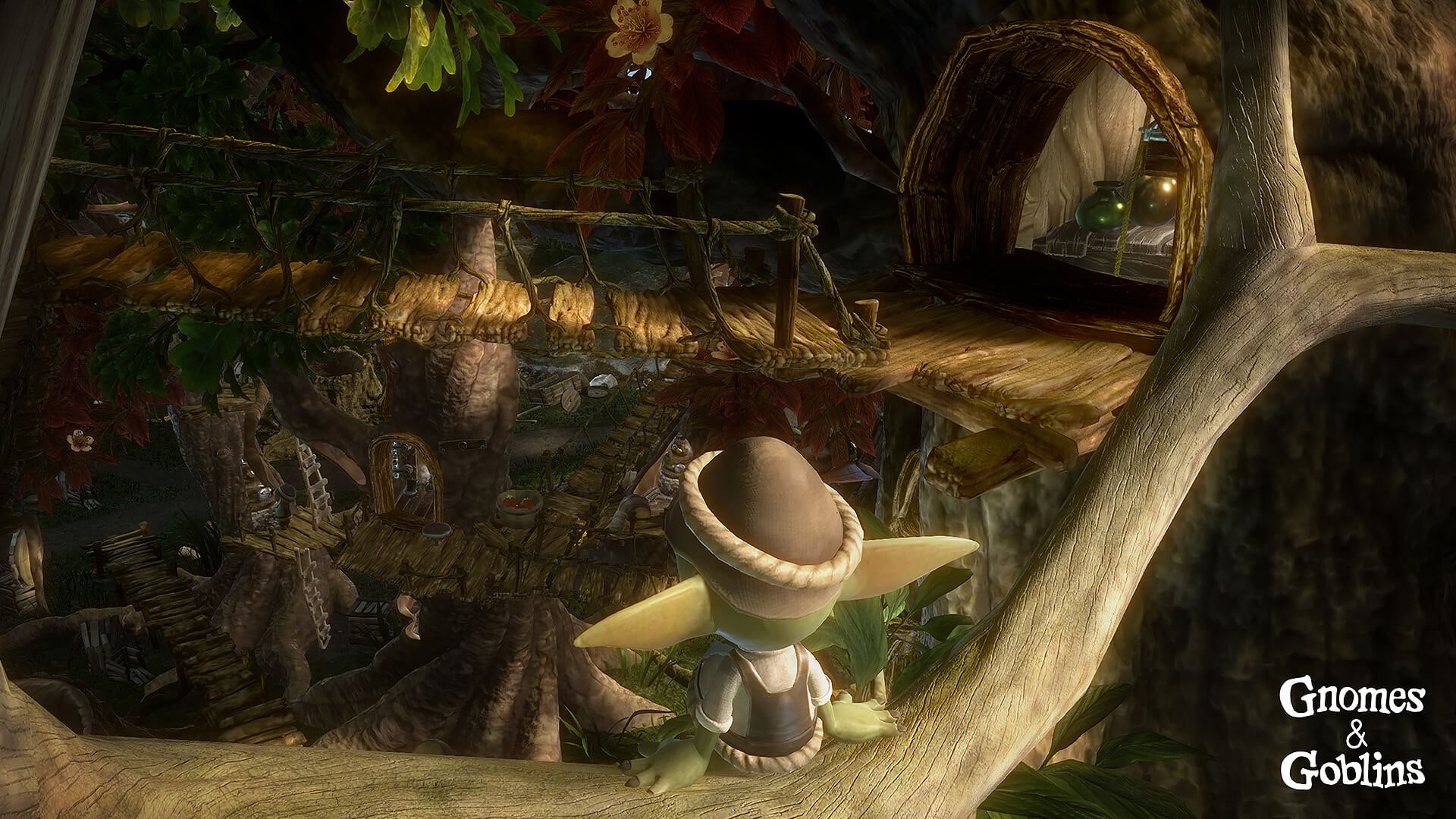 Creative storytelling in a nonlinear environment

Rowell credits Favreau’s creative storytelling abilities with giving the game its appeal. “When Jon first approached us with his early concept and sketches, I immediately knew we’d found a wonderful storyline populated with engaging characters to help us explore the VR medium.” he says.

“Jon, who came from film, immediately realized that the opportunity here was to approach this experience not starting with a script, but actually starting with some of the key elements and feelings that we wanted to engender,” says Spiteri.
The difference between creating a VR game and a film is significant. “VR is a totally foreign land that we are still exploring and discovering,” says Skyler Clark, Lead Designer at Wevr. “You need to throw out the old rulebook; traditional design principles don't always work the way you'd expect. This adds a whole extra layer of challenge to the process, and is part of what makes VR so exciting.”

Because, unlike with films, in a VR experience players can look around and often move around as well, the team had to ensure that their crafted story moments were not missed. To do this, they built a scriptable event system using a combination of C++ and Blueprint. “This system gave the user freedom to roam the world unhindered without fear of missing out on any of the story moments we wanted to present them,” says Rowell. 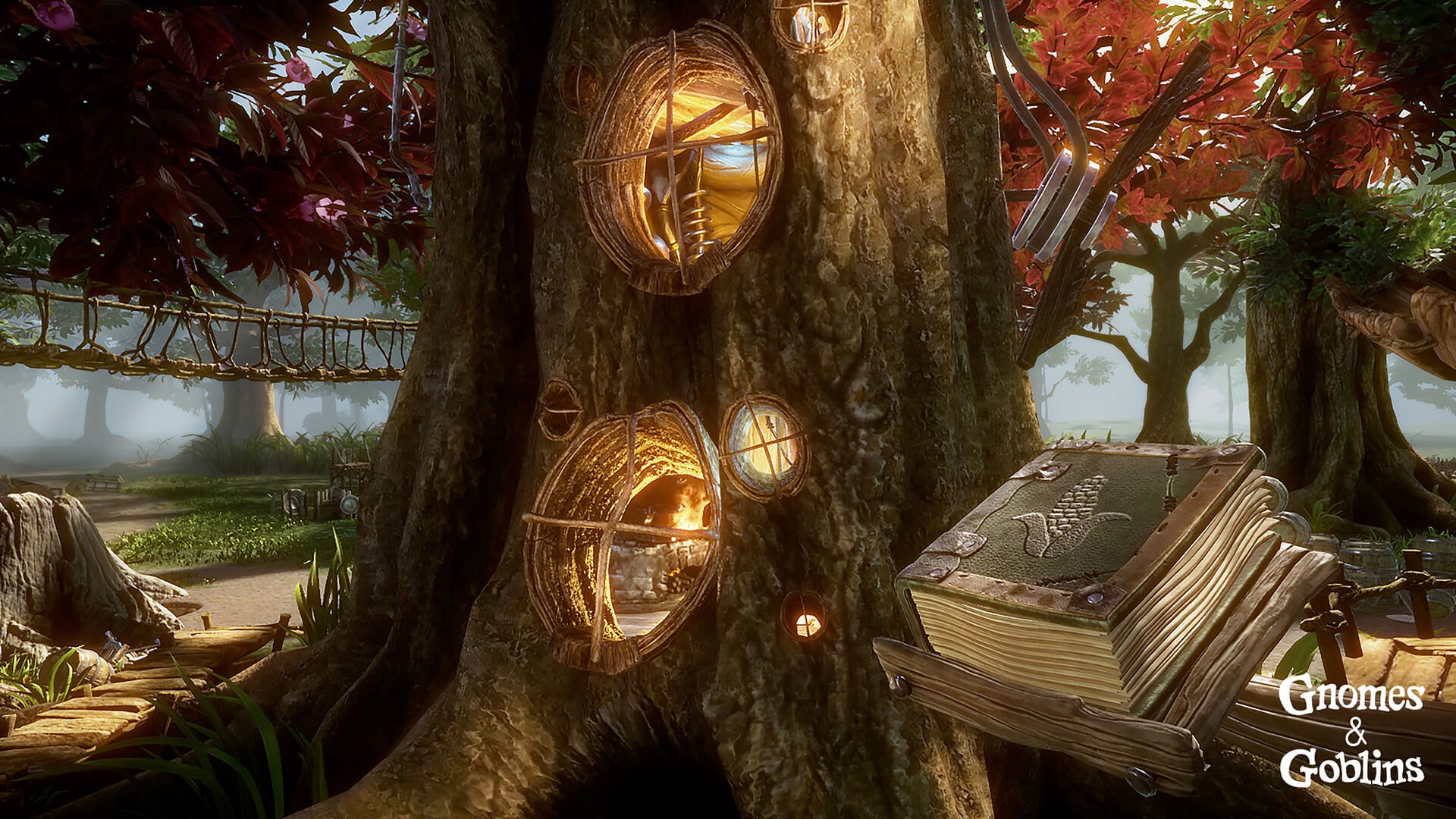 A key factor in the game’s success lies in its ability to enable the player to form an emotional connection with Buddy, the principal character, which it does by using an AI system to have the virtual guide respond to your movements and actions.

“The goal was always to figure out a way to bring this character to life,” says Spiteri. “And it came down to really thinking of Buddy's brain, and creating an AI module, and a set of artificial intelligence heuristics that allow this character to intelligently respond to you in different ways. That's where we took advantage of the Blueprint capability, and building C++ routines and the combination of those two to build an AI emotion system that is at the center of Gnomes & Goblins.”
Imagery courtesy of Wevr
“We started focusing on the AI around the eye connectivity, like when the eyes are looking at you, reacting to you,” says Rowell. “They know where your hands are, what you're picking up. And it's amazing how just through a series of actions across multiple characters, you can build this world. I think we're just scratching the surface of what we can do.”

Buddy’s creator could not be more pleased about how it turned out. “I’m incredibly happy to see how Wevr has brought my original vision to life in virtual reality,” says Favreau. “From the earliest days of rough sketches and abstract concepts, Wevr’s entire team committed to fostering the kind of emotional connections that I believe will allow Gnomes & Goblins to occupy a special place in the hearts of players around the world. We worked hard to create the mood and feeling that Gnomes & Goblins is like a virtual theme-park ride, where magic and meaning are waiting around every corner.”
Spiteri and Rowell are already thinking about what’s around the next corner for Wevr. “The biggest takeaway for us at this point is to keep going,” says Spiteri. “The opportunity is to kind of look ahead over the next several years with where Unreal Engine 5 is going, and what the possibilities are going to be on new devices, and continue to build on the beginnings of what we've put together here.”