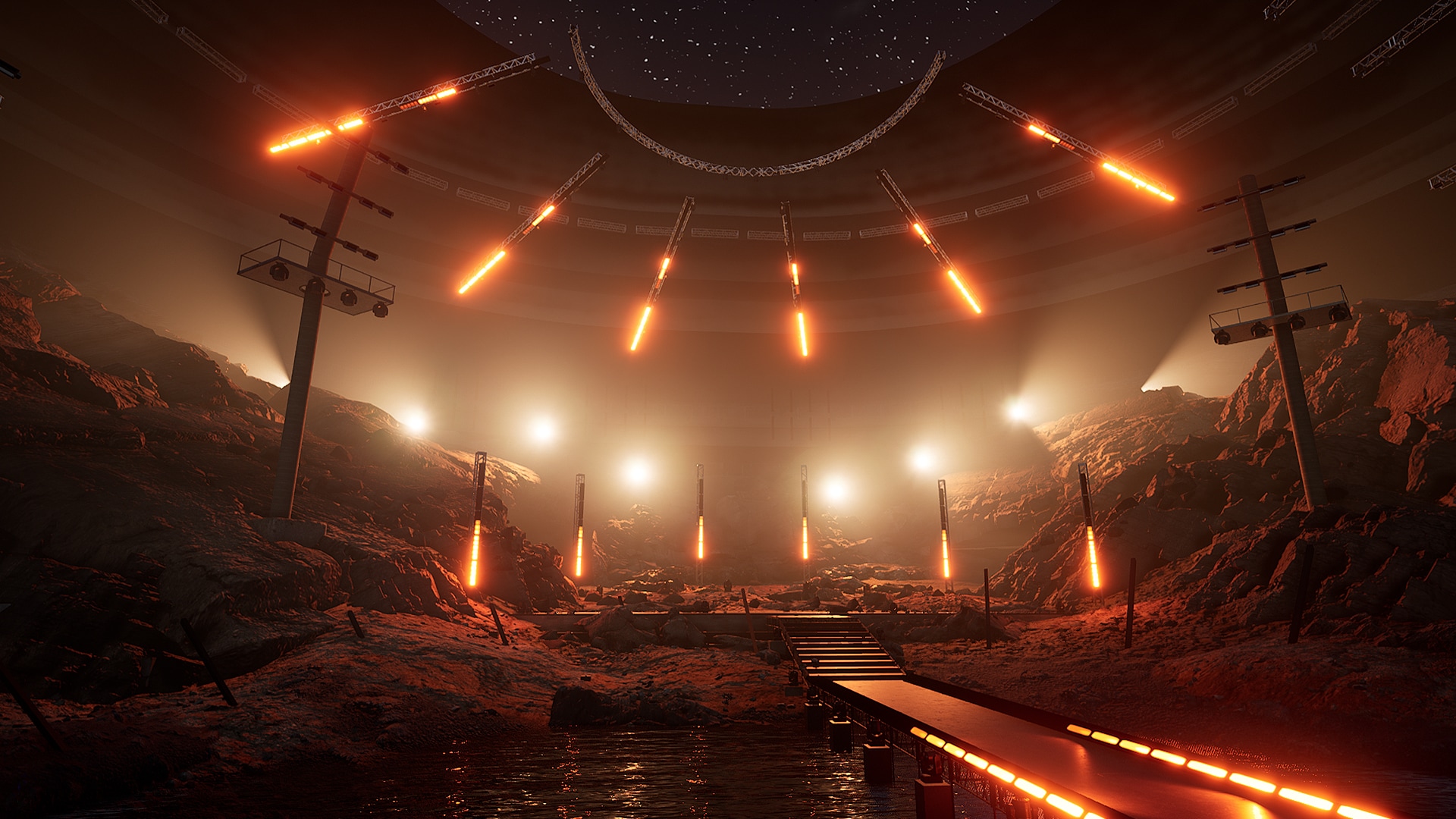 The Digital Multiplex (DMX) protocol has been an industry standard for achieving lighting control for more than three decades; however, accurately previsualizing lighting programming that would later be used in a live performance to control and drive DMX-enabled fixtures has been challenging, with existing solutions offering limited ability for presenting realistic and accurate results.

In Unreal Engine 4.25, we introduced our initial support for connecting the engine to external controllers and devices that use the DMX protocol. This not only creates new possibilities for using real-time rendering for lighting previsualization, but also anticipates a future where users may one day be able to control or trigger devices directly from within the engine during a live event.

Since then, we’ve been collaborating with multimedia studio Moment Factory to produce a sample project to share with all our users. Throughout the creation of this sample project, the team members at Moment Factory have shared their experiences, and their feedback has been essential in our development process for the new DMX plugin.

Download the complete sample project to learn, explore, and use in your own live event lighting and effects design. It’s yours to use however you want, and it’s completely free.

Get the sample
Montreal-headquartered Moment Factory combines video, lighting, architecture, sound, and special effects to create remarkable experiences. Since its inception in 2001, it has delivered more than 450 unique projects worldwide, including the critically acclaimed Lumina Night Walk series. Productions span the globe and include clients such as Madonna, Jay-Z, Billie Eilish, and Childish Gambino, alongside high-profile companies like Disney, Microsoft, and Sony; installations feature in such diverse settings as airports, cathedrals, and zoos.
Already familiar with Unreal Engine from earlier projects, and having used DMX in production for nearly 20 years, Moment Factory was an ideal partner to help guide our engineering development while creating the sample, and they were delighted to seize the opportunity.

“This seemed very interesting for us as designers, for the live industry to develop the tool not only for our needs, but also to help Epic bridge the gap from the physical world of the live events to the digital world.” says Daniel Jean, Producer at Moment Factory.

Initially, the team spent time researching, exploring, and testing the first iteration of the plugin in Unreal Engine 4.25 to better understand the tool’s potential. What they discovered excited them.

“As multimedia show designers, working with a game engine like Unreal felt like discovering a whole new world,” says Jean. “We had been given a tool where there were now so many more possibilities. Unreal Engine elevates our creative process by blending the workflows of content design, lighting, and scenography. Unreal Engine truly shifted our perspectives on the multimedia production process.”

The team then began to plan the sample project, drawing inspiration from Quixel’s real-time cinematic Rebirth, created in Unreal Engine. Their stage design juxtaposed the virtual with the real, placing scenography reminiscent of the piece at the center of a massive arena. To leverage Unreal Engine’s rendering capabilities and to showcase the newly developed DMX proxy fixture system, they designed and created a complex lighting rig that filled the entire open space.
With the initial plan agreed, the team began creating the concept for the lighting design, while simultaneously sharing their feedback on the plugin with the Unreal Engine developers. This invaluable feedback was used to adapt and enhance the plugin for the 4.26 release.

After the first preview releases of Unreal Engine 4.26 were delivered, Moment Factory performed an additional round of precision testing, resulting in many improvements making it into the final release.

Moment Factory’s knowledge and expertise have been invaluable to the Unreal Engine development team. The team’s feedback has provided a stronger understanding of market expectations when it comes to previsualization and the production of virtual and live events. The sample project the team created pushed the boundaries of what would be achievable in a production environment. 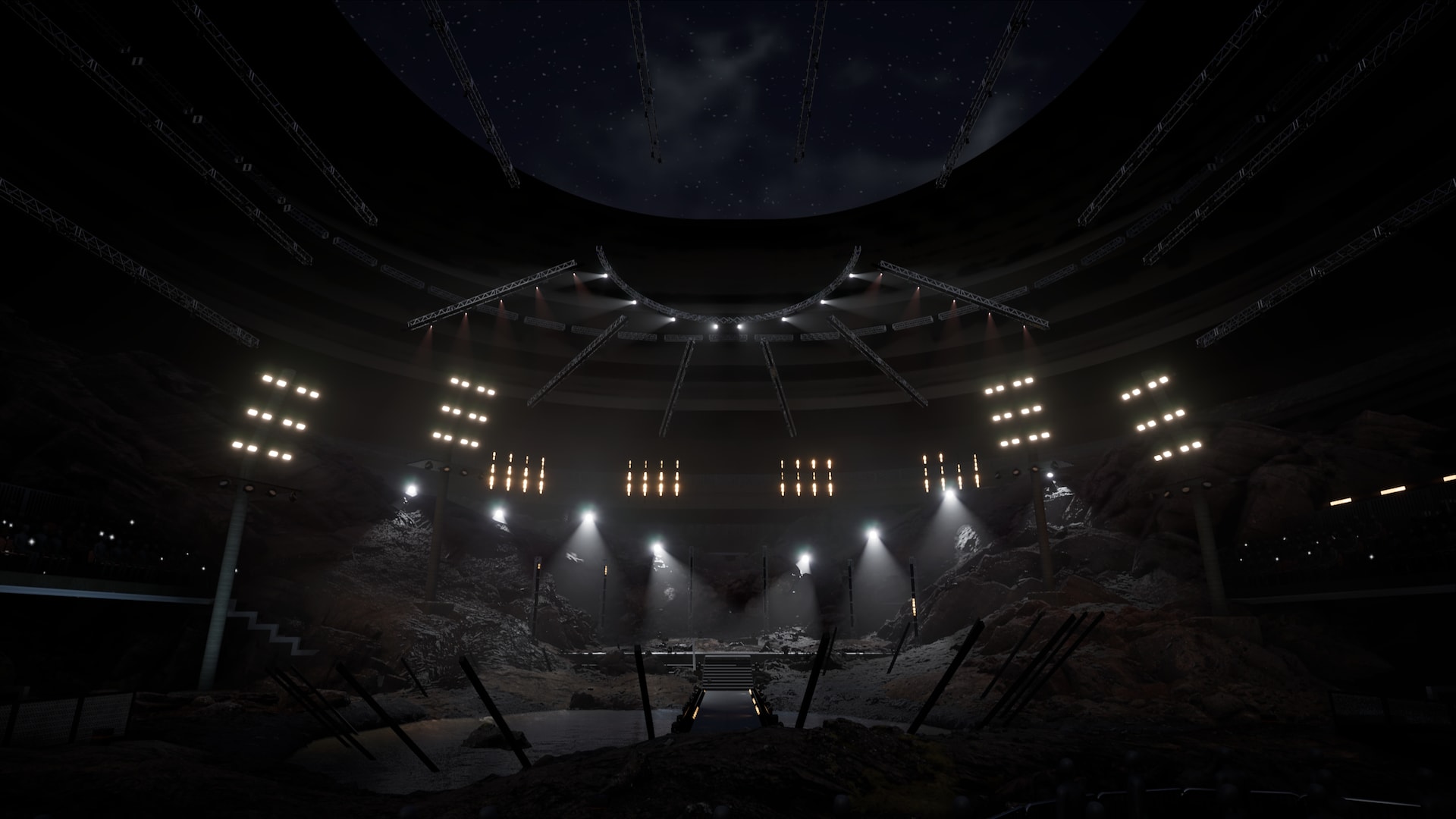 Image courtesy of Moment Factory
“By putting this tool in the hands of our show designers at Moment Factory, Epic Games crash-tested the development of their DMX plugin, using the concrete needs, expectations, and examples of the show production industry,” says Jean-Baptiste Hardoin, Moment Factory’s Creative Director.

“We approximated the conditions of a real-life show production in order to test the limits of mixing content, lighting, pyrotechnics, lasers, camera movements, realistic scenic renders, and audience,” he explains. “Ultimately, this created a strong use case for Unreal Engine in a real-life production and previs workflow. Collaborating on something that synthesizes both our experience and expertise has allowed us to create a tool that raises the bar for virtual show design.” 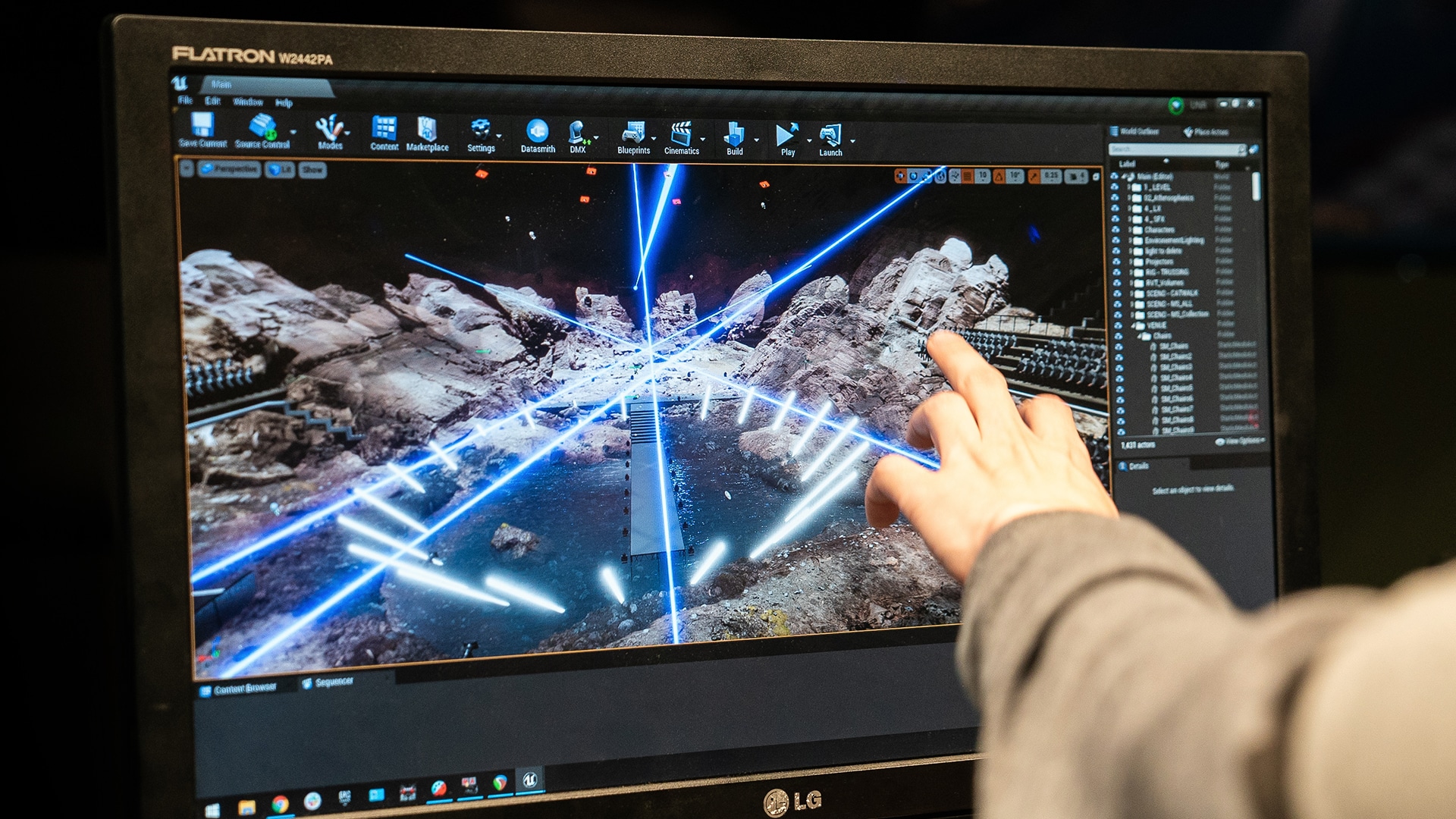 Image courtesy of Moment Factory
The team is confident that the sample they created will serve as an important tool for Unreal Engine designers, and one that will inspire users and the event industry at large to explore new creative possibilities. “We’ve aimed to create something emotional and exhilarating that goes beyond simply showcasing the software,” says Hardoin. “We feel the sample can benefit a wide range of users looking to explore their creativity in a virtual space.” 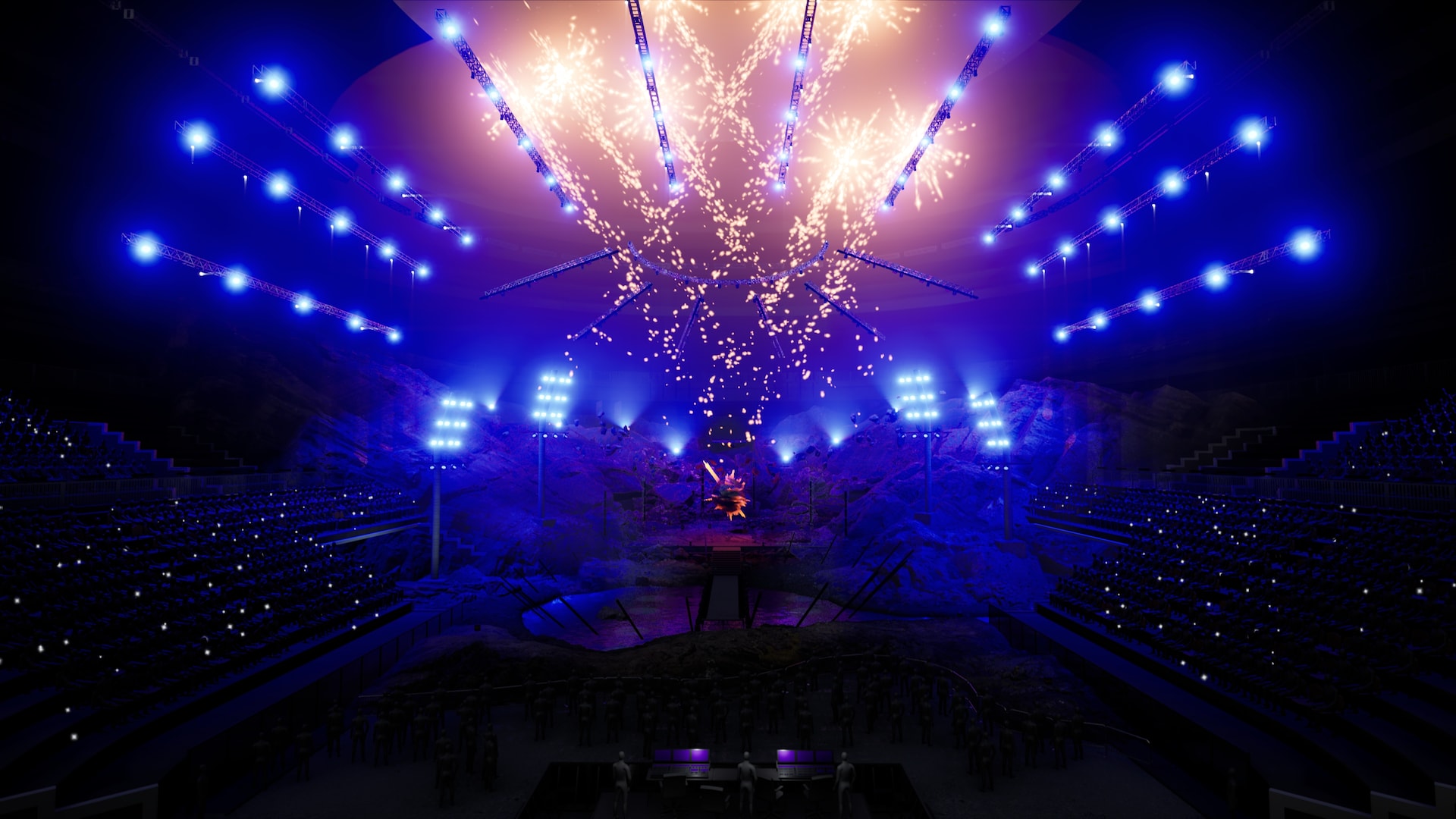 Image courtesy of Moment Factory
“I think our mind is about to be blown by the user base of Unreal,” says Lighting Technologist Jean-Benoit Meunier. “I'm very keen to see what crazy things people will come up with.”

With the DMX plugin, you can design your show using an external lighting console, such as the GrandMA2 Light used to program this sample. This programming can then be recorded to a Sequencer track, enabling you to replay it autonomously, with the console disconnected. You can experience the show from the FOH (front of house location) perspective, or using the provided sequence of animated camera shots. For convenience, we’ve included the Sequencer DMX track recording with the sample, as well as the accompanying show file. 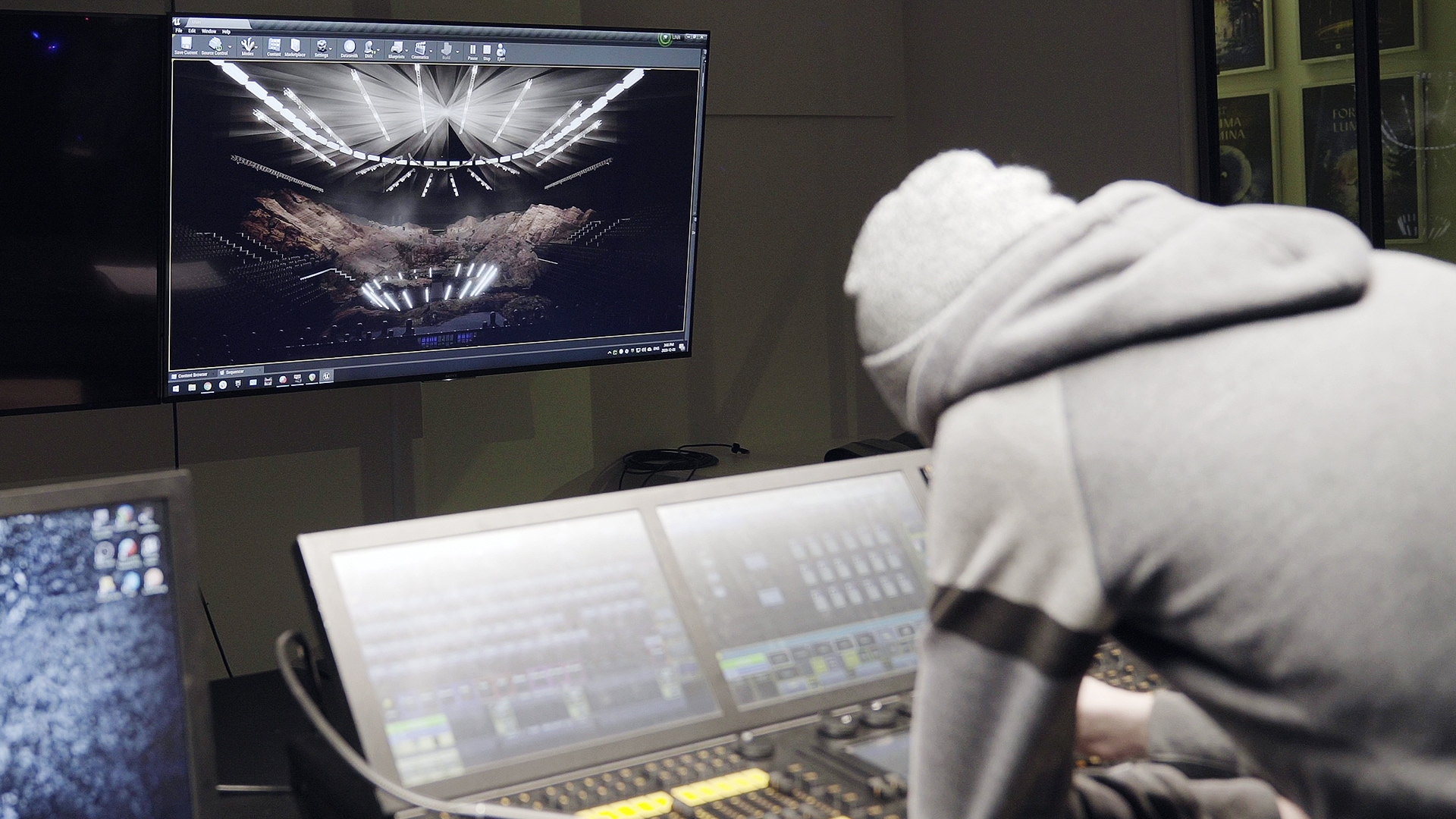 Image courtesy of Moment Factory
In the context of live event previsualization, the project has been designed from the ground up to be as close as possible to its real-life technical counterpart. All lights, fixtures, and effects seen inside the project are entirely driven by the Sequencer DMX track, in sync with the soundtrack and the other show elements.

As a side note, the ability to drive real-word fixtures from Unreal Engine in this way has the potential to benefit other industries, such as virtual production where LED walls are used for in-camera VFX.

Spanning 15 DMX Art-Net universes and 7,368 DMX channels, the project is driving a total of 768 fixtures via 144 unique lighting cues, including custom LED strips, scenic wash lights, strobes, spotlights, pars, and truss toners—not to mention a variety of effect fixtures such as pyrotechnics, fireworks, and RGB lasers to add that extra punch. 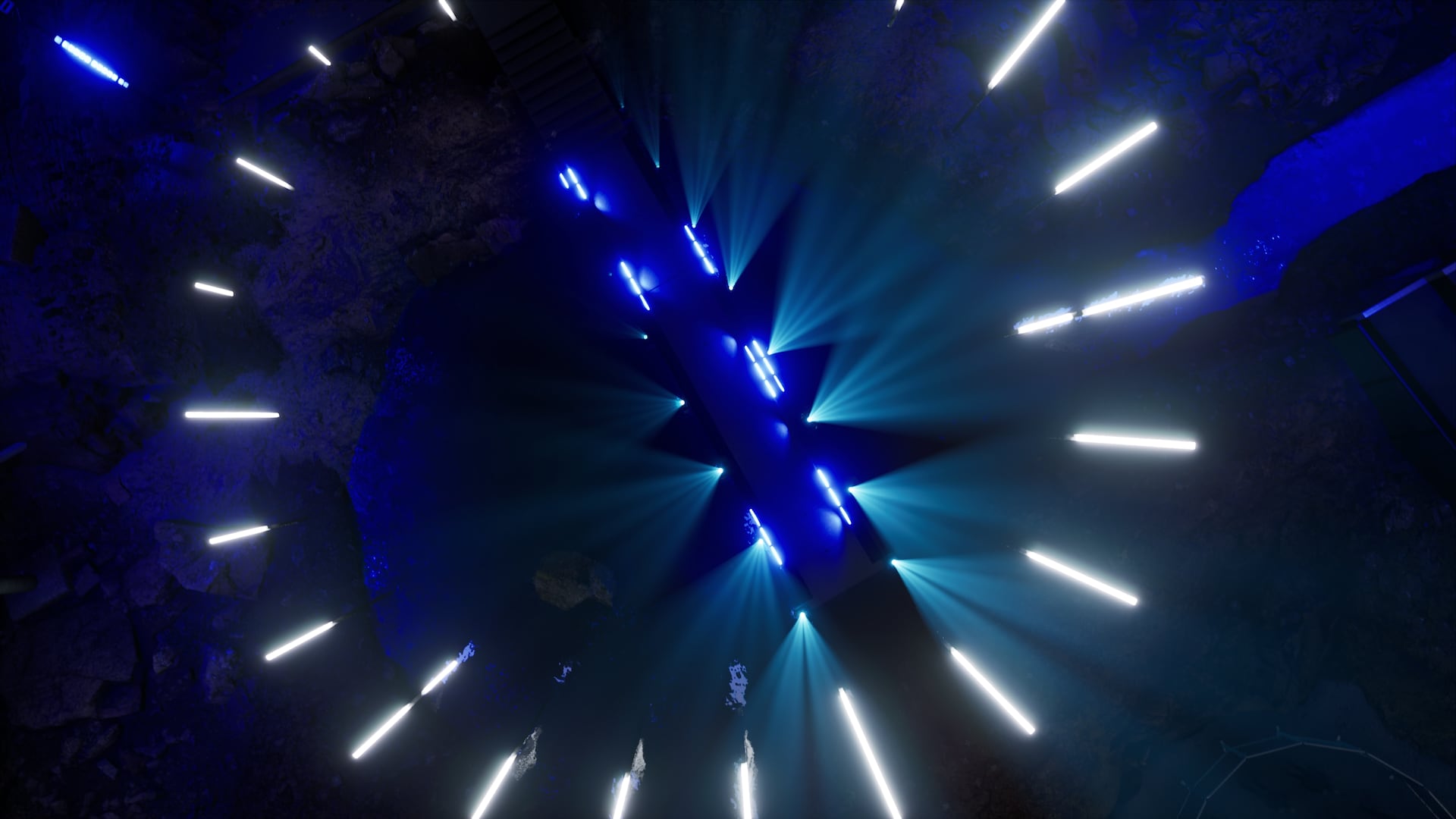 To provide an example of how Unreal Engine can be used as an intricate part of the production workflow that goes beyond simply previs, the project also demonstrates the ability to drive additional virtual creative elements using DMX.

Beyond what’s explored in the sample, Unreal Engine’s support for OSC and its REST API offer further integration possibilities for even more advanced show design and control.

As show producers themselves, Moment Factory is excited about how the new feature set will change the way it works.

“It’s valuable to have a tool that allows you to accurately visualize your creative intentions in the early design phase,” says Lighting Designer Marc Tétreault. “As the project progresses, it allows us to further refine the design and integrate each new component of the show, all within the same previsualization environment. It enables our team to be more efficient and agile throughout the entire creative process.

“At Moment Factory, we are always playing with visual illusions, mixing elements together to create memorable experiences for our audience. Working with a photorealistic engine like Unreal has brought us one step closer to a fully accurate previsualization. Unreal Engine has shown us that there can truly be no limit to our creativity.” 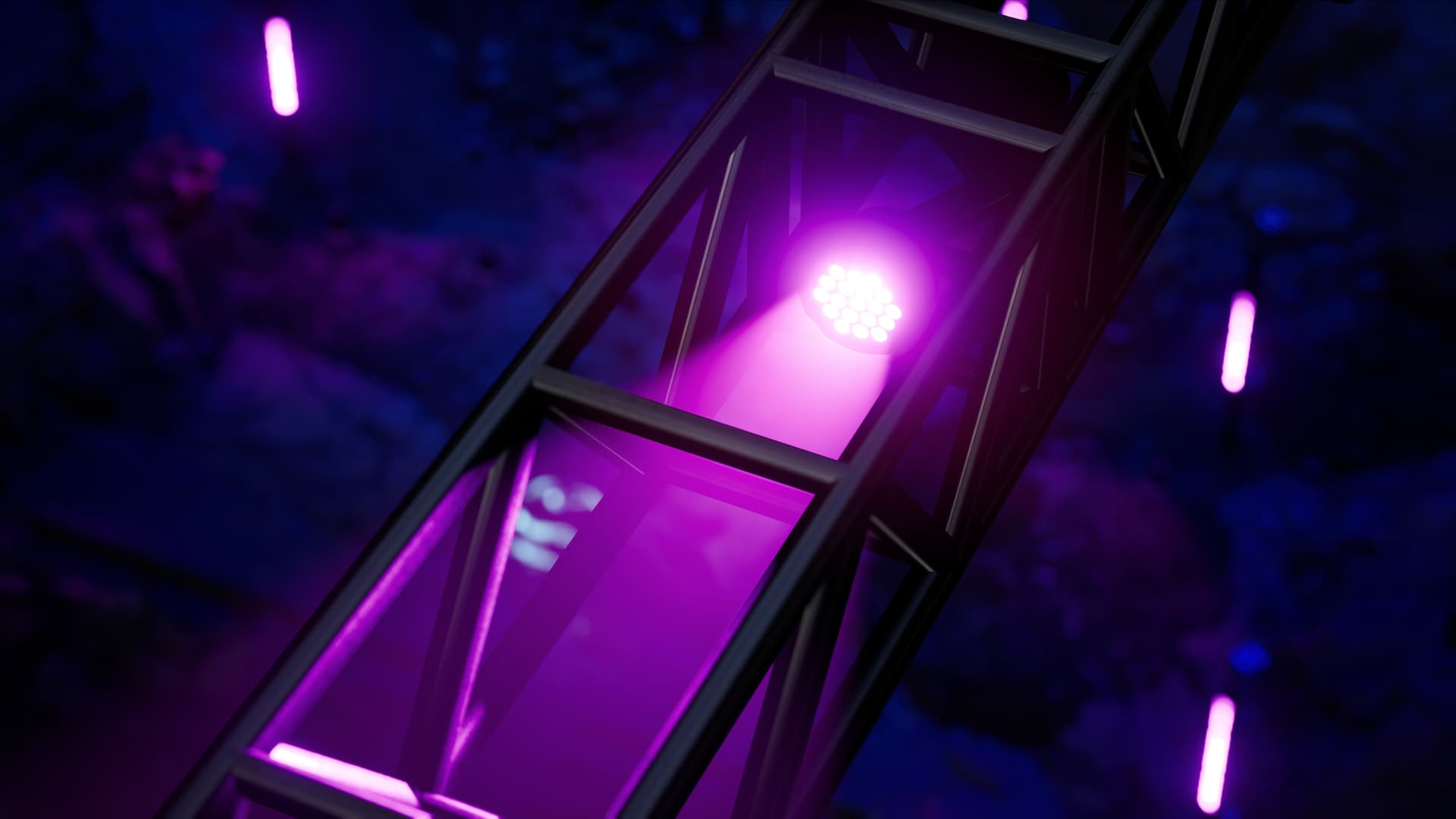 Image courtesy of Moment Factory
Meunier points out that the clients benefit too. “It's always really difficult to share our lighting ideas or whatever we're seeing in our heads to our clients,” he says. “Now that we have a tool like Unreal, it really brings a client closer to the creation experience. The client really has the ability to participate in real time with whatever we're developing. They can have a full picture of what we’re actually selling them.”

Dominic Audet, Moment Factory’s Co-Founder and Head of Innovation, predicts an even greater impact in the future. “As live performance and online performance are now coexisting, we foresee the hybridization of real and virtual show environments,” he says. “If Unreal Engine becomes a common tool to create in both the virtual and physical worlds, it will allow us to create a consistent creative universe for artists—online, offline, before, during, and after the show.

“We feel that we are only at the tip of the iceberg of what Unreal Engine can offer. It is responding to a long-standing need for lighting, set, and video designers to be able to merge their visions within a single collaborative tool by seamlessly connecting multiple cutting-edge technologies. We feel that Unreal Engine will not only centralize their workflow but reveal new possibilities and inspire the next wave of innovative stage design.”

Download the complete sample project to learn, explore, and use in your own live event lighting and effects design. It’s yours to use however you want, and it’s completely free.
Get the sampleDownload Unreal Engine