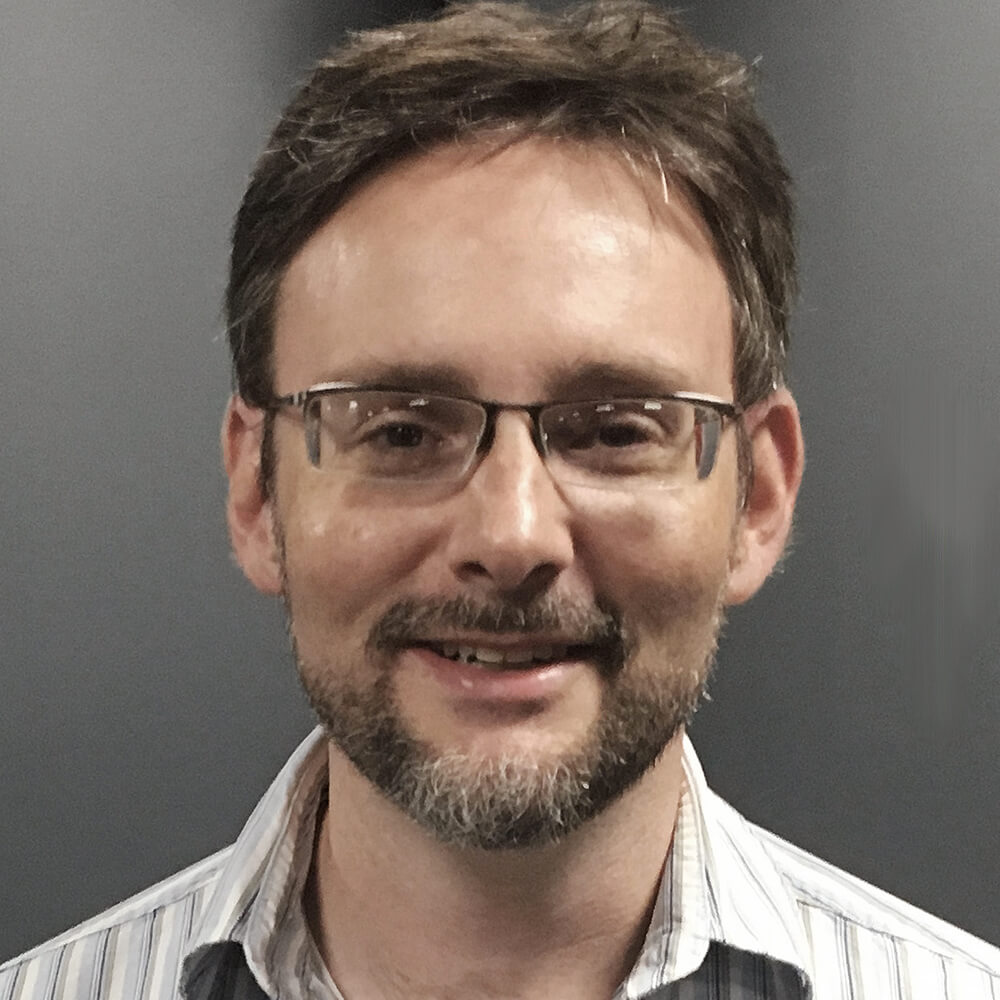 Shaun Foster (MFA) is an Associate Professor of 3D Digital Design at the Rochester Institute of Technology. With over 15 years of experience in 3D graphics and interactive educational design, he has worked on multiple award-winning projects, has received multiple grants, and publishes and speaks regularly at top conferences.

Shaun Foster, associate professor at the Rochester Institute of Technology (RIT) School of Design heads the undergraduate 3D Digital Design program at the school. With the help of an Epic MegaGrant, Foster launched a new course, Cinematography and Previsualization, in the Spring 2020 semester. He also just released a new dynamic 16-week course for educators, Unreal Engine Foundations, on the edX platform.

For the first two months of 2020, things were going smoothly for RIT. A few months ago, Foster’s plans, like those of educators around the world, were abruptly rearranged by the Covid-19 pandemic. Fortunately, RIT already had some elements in place that eased the transition to remote learning. The school’s IT department had put in place shared Google Drives and the ability to generate remote quizzes. Foster had also been using Zoom and Google Meet for synchronous meetings and discussion.

But not all students had a computer that could run Unreal Engine. To address this, the IT department quickly set up logins for students to use with virtual machines. Foster adjusted his teaching methods, incorporating asynchronous student content delivery, recording videos, and generating slideshows. As the parent of a young child, Foster also had to adjust to balancing home life with working full-time in his home office.
Image courtesy of Rochester Institute of Technology

Even before the pandemic, Foster liked a challenge—especially the feeling of being at the center of what he calls a technology-driven multi-field convergence. He is excited about new approaches to 3D design, film, and game-making enabled by tools in Unreal Engine, and notes that real-time technology crosses into many fields, causing them to overlap in new areas and creating a set of transferable skills.

With his tutorials, Foster is aiming to help people who are outside the traditional Unreal Engine fields that have, until recently, being largely focused on entertainment. That is now changing, as the tool is finding widespread adoption across many industries.

As part of his outreach effort, he’s collaborating with researchers and students in medical illustration, interior design, and industrial design, in addition to his students in 3D digital design. He is even finding overlapping interests in graphic design and next-generation user interface design.

From the studio to the classroom

Foster’s interdisciplinary interests emerged at an early age. He grew up surrounded by artists. His mother is a sculptor-ceramicist, and his father is an art photography professor. So naturally (he notes with a laugh), he decided to work on a financial team and become a licensed stockbroker. But after three years of working in finance he felt drawn to the arts again, and in 2003 he finished and returned to school to complete a masters degree in 3D computer animation and interactive design.

After graduation, he joined Four Directions Productions, a startup owned by the Oneida Indian Nation in central New York. The company created commercials, visual effects, and an animated film called Racoon and Crawfish based on an Oneida legend. The film won a number of awards and invitations to film festivals. Foster spent the next five years working in the film industry, before joining RIT and helping launch the 3D Digital Design program.

“The program appealed to me because it offered the potential to not just create traditional 3D animation, but to allow for a synthesis of these possible emerging technologies,” he says.

Foster applied for an Epic MegaGrant, which helped him develop a new course at RIT called Cinematography and Previsualization. The course connects to some of the emerging workflows in virtual production, pioneered by Epic Games. As disciplines converge, one challenge is translating the terms used in different disciplines.
Image courtesy of Rochester Institute of Technology
He has been working with students to develop a set of terms that can connect similar concepts in games, films, VR, and AR. The new course is currently being taught to higher-level students, but Foster wants to introduce the concepts earlier, to freshmen and sophomores. His own broad interests in microelectronics, games, virtual reality, and augmented reality drive his teaching and his enthusiastic embrace of Unreal Engine as a place where they all meet.

“I’ve just been pursuing my passions and having an awesome time,” he says. “I love creating the tutorials, and working on condensing information, and then riding the edge of where the technology’s going.”

The growing selection of content on Unreal Online Learning has become an increasingly valuable resource for educators. And Foster notes that not only has the collection grown from a few videos to hundreds, but the courses have become an evolving ecosystem, where course creators can be inspired, and springboard off of one another’s ideas. His teaching philosophy is linked to the 80-20 rule of knowledge, which states that you will use 20 percent of the tools 80 percent of the time.

Foster believes that a huge amount of the knowledge of a discipline is stored in its vocabulary, and is creating a library of hyperlinked terms. He is designing his curriculum and tutorials to be applicable across multiple disciplines.” Foster sees this sort of cross-pollination as enabling students who are interested in entertainment to discover opportunities in other industries as well.
Image courtesy of Rochester Institute of Technology
The speed of technological change is one of the biggest issues facing educators. For Foster, the fact that Epic Games is releasing new tools and content nearly every three months means that he is constantly updating his resources.

“It's almost like the speed of obsolescence, or the half-life of knowledge, is increasing,” he says. “I think that’s one of the biggest challenges. The key is to make sure that the information design identifies and tags where and when things change, and in what version of Unreal.”

In addition, Foster has been incorporating vocabulary from multiple disciplines. Integrating the terms from diverse disciplines has been a challenge. While designers talk about affordances, it’s not part of the traditional language of graphic design or 3D digital design vocabulary. Meanwhile, Human Computer Interface (HCI) design has some overlap with both, plus connections to interactive VR design.

“So things like ‘staging’—how you design something that guides an eye, or guides the user to do a certain type of activity—that seems to be more relatable,” he says.

Foster finds the intersections and differences among these diverse vocabularies very fertile ground for the creative exploration that fuels his research and teaching.

Foster believes there is no one general area where every student stumbles, that it is different for every person entering the program. “Often they’ll be really strong in a design area, but then weaker in a technical area” he says. “Some will be stronger in technical areas, weaker in design. And then some will be right in the middle. And all three have danger areas. It also depends on what your goal is; if you want to work at a AAA studio, then you need to be a deep specialist, either in design or in tech.”
Image courtesy of Rochester Institute of Technology
Foster refers to an ongoing discussion between academics and the Epic community. “There’s a huge concern about the return on investment, especially for a really expensive college education,” he says. “And it’s interesting, there’s an inversion of some of the skills—critical thinking, ideation, those are on the rise again.” He focuses on adaptivity, combined with the ability to rapidly add on new skill sets, and to think both critically and creatively. Another important skill is mastering collaborative workflows.

“It’s hard: nobody likes working on group projects in college typically,” he laughs. “But we’re definitely working towards figuring it out, because all of our students that go into the best studios come back and they talk to the students and they say, ‘You know what? Being able to work with people, and communicate, it’s kind of a critical skill set!’ ”
Image courtesy of Rochester Institute of Technology
At RIT the new program aims to encourage students to go deep, but also master a broad range of skills earlier. Foster keeps an eye on Epic’s roadmap, which he uses as a guide for where they’re going and new tools in development. His advice? “If I see something that’s a multi-step workflow that’s going to be turned into a button, I try to avoid teaching students the multi- step workflow.”

How an Epic MegaGrant validates teachers

Foster’s interdisciplinary courses prepare students to work wherever 3D graphics and design are found. His students have found jobs around the world, working with robotics or designing furniture, as well as in the entertainment industry. Though introducing a new interdisciplinary approach into the curriculum can cause friction, Foster believes that receiving a MegaGrant has helped convince a few of his fellow academics that his ideas are solid.

“It’s good to be proven right!” he concludes. “So Epic Games, thanks again!”

Sign up for the Education Newsletter to receive monthly updates and free, valuable teaching resources for integrating Unreal Engine into your curriculum and preparing your students for an immersive world.
SIGN UP NOW
News

Get a glimpse into the future of interactive storytelling and entertainment with Unreal Engine 5 in this cutting-edge experience that showcases the start of an exciting new era for creators and players alike.
News

Get a glimpse into the future of interactive storytelling and entertainment with Unreal Engine 5 in this cutting-edge experience that showcases the start of an exciting new era for creators and players alike.
Event

Join us for a week-long celebration of all things virtual production as we celebrate its success with some of the industry's leading lights from LucasFilm, DNEG Animation, Reel FX, Halon Entertainment, The Third Floor, PROXi Virtual Production, and more.
Event

Join us for a week-long celebration of all things virtual production as we celebrate its success with some of the industry's leading lights from LucasFilm, DNEG Animation, Reel FX, Halon Entertainment, The Third Floor, PROXi Virtual Production, and more.
Event

Unreal Engine is driving over 30 simulation applications at the biggest Training and Simulation conference of the year. See where they are, as we break down key booths, key talks, and reveal which Marketplace content will be free from the week of the show.
Event

Unreal Engine is driving over 30 simulation applications at the biggest Training and Simulation conference of the year. See where they are, as we break down key booths, key talks, and reveal which Marketplace content will be free from the week of the show.