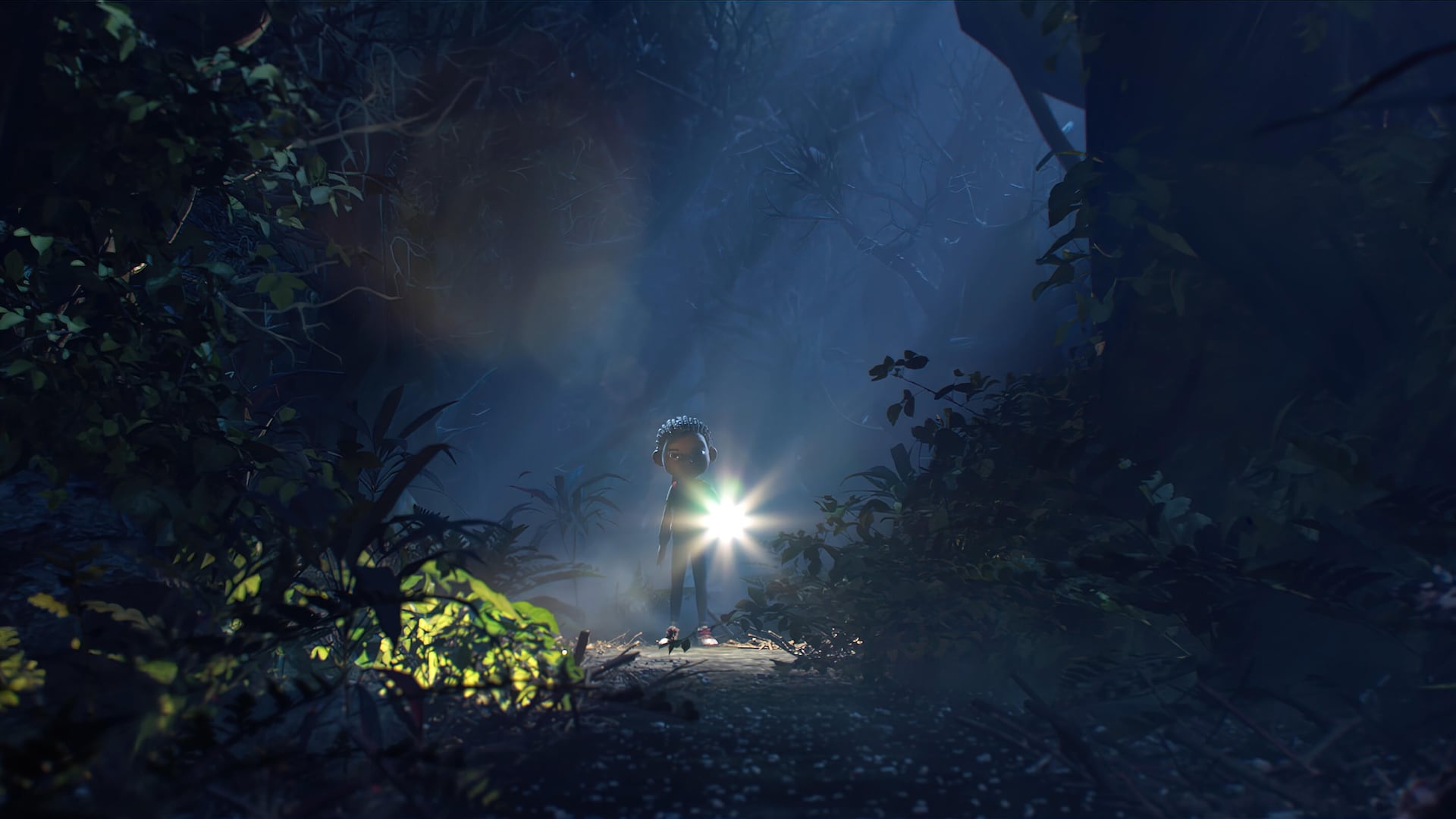 June 29, 2022
Animation
Cloud
Epic MegaGrants
Film & Television
Preymaker
Today sees the trailer premiere of animated short Blue from cloud-native studio Preymaker, led by former Co-Founder of The Mill New York, Angus Kneale. Created with Unreal Engine’s real-time technology, executive produced by Angus Kneale and directed by Preymaker’s Rob Petrie, the project will be previewed during Animation Week.
Preymaker was established in 2020 by Angus, along with Melanie Wickham and Verity Grantham, both former colleagues from The Mill New York. Preymaker is a global team of award-winning creative artists, technologists, and producers working exclusively in the cloud on everything from brand campaigns and immersive games to content for the metaverse. Its latest project, Blue, is a ground-breaking sci-fi short that takes real-time animation to the next level.

“Technology married strategically and imaginatively to creativity is what drives Preymaker and is a key to the success of the company, its makers and clients,” says the company’s Chief Creative, Angus Kneale.

Recognizing that the cloud would play a vital role in production workflows in the coming years, the forward-thinking Preymaker team fortuitously opted for a cloud-based infrastructure right before the pandemic. When the world went into lockdown, the Preymaker team was already set up with a virtualized workflow, helping them carry on seamlessly. Not only does the studio’s cloud-first approach mean that it can access the best talent from around the world, it also enables them to iterate quickly with the technology available. What’s more, there’s no need to constantly push data-heavy assets from place to place.

Taking full advantage of its cloud-based workflow, Preymaker created its latest project, Blue, using Unreal Engine and partly funded with the support of an Epic MegaGrant. With Blue and its young protagonist Jules, the Preymaker team wanted to open people’s eyes to a more diverse world by telling a story from a perspective that has not been adequately represented in our culture. 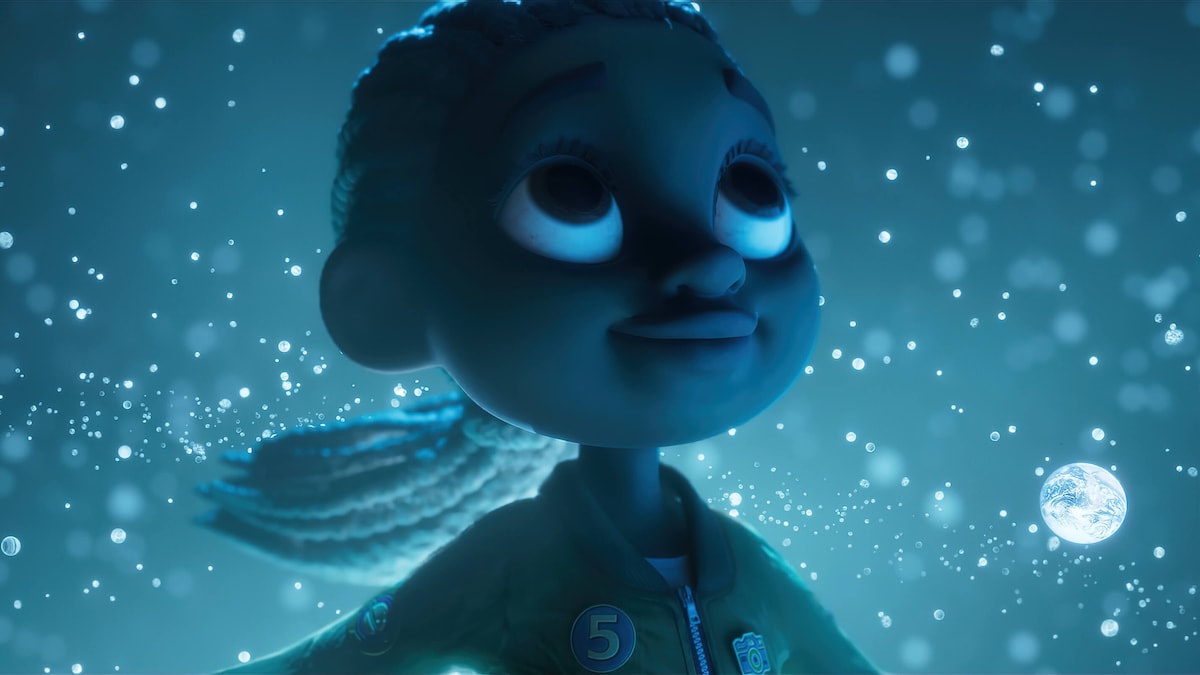 Image courtesy of Preymaker LLC
“It was important to have a multidisciplinary, global team working on Blue. The world can be a scary place, especially for young people, and in Jules' world, we wanted to work together to create a space of wonder and heroism amidst what can encompass a lot of fear and uncertainty,” says Rob Petrie, Director of Blue. “We leaned into sci-fi as it felt the perfect way to refract the realities of our own world.”

While the story is developing daily, Blue is a tale of a young girl who looks up to the stars and wonders if we will ever get to explore the worlds and galaxies we are yet to see, or even begin to imagine. Love and exploration are the central themes that bind the story together. And, of course, there are some intergalactic villains along the way. 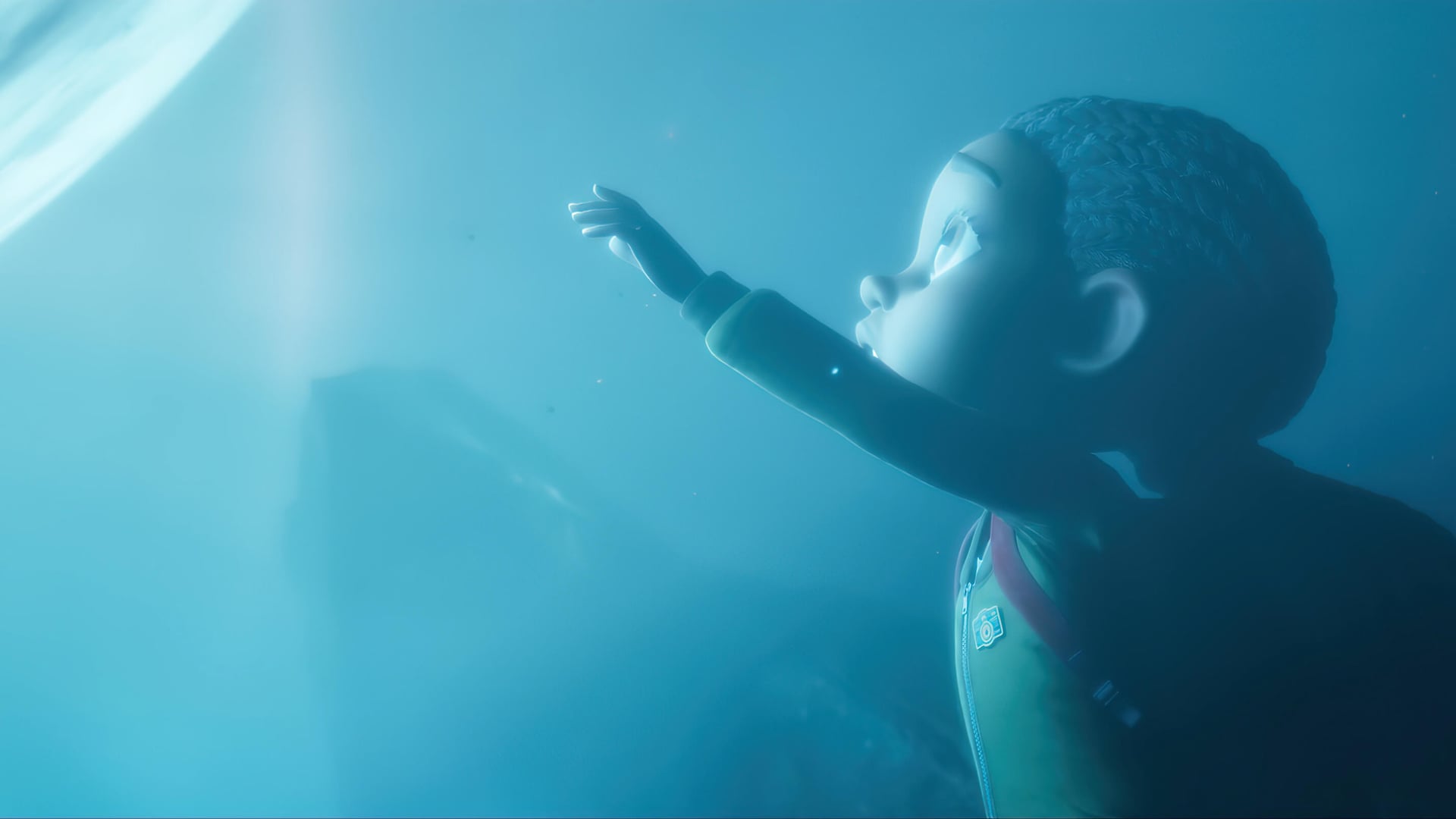 Image courtesy of Preymaker LLC
Preymaker is keen for the project to be more than just an animated short. As developed, Blue can be a mobile game, AAA or VR game, a live animation series, or even a metaverse experience. “With the storytelling and Epic's backend real-time technology bringing it to life, along with directors and writers we’ll bring on board to authentically share Jules’ story, Blue can be all those things, which is the most exciting thing of it all,” says Rob.

Preymaker used Unreal Engine because the team wanted to push the envelope in terms of animation fidelity. While the animation itself was keyframed in Maya, the rigging and process of bringing the assets into Unreal Engine as a one-to-one translation was one of the most complex aspects of the project.

“Alembic files, we soon discovered, were too huge to bring into Unreal especially as we had around 200 shots,” says Rob. “So, the setup to the rig for the hero character became incredibly involved in terms of the number of bones we needed to give the animators for the control they required to really bring Jules to life.

“Pixar was a huge inspiration in terms of the amount of controls our animators had when it came to complex motion and shapes; we kept that in mind at every iteration of the rig. Our controls ran over a hundred, which is what we needed to get the level of fidelity, and subtle movement, that we hoped to achieve. 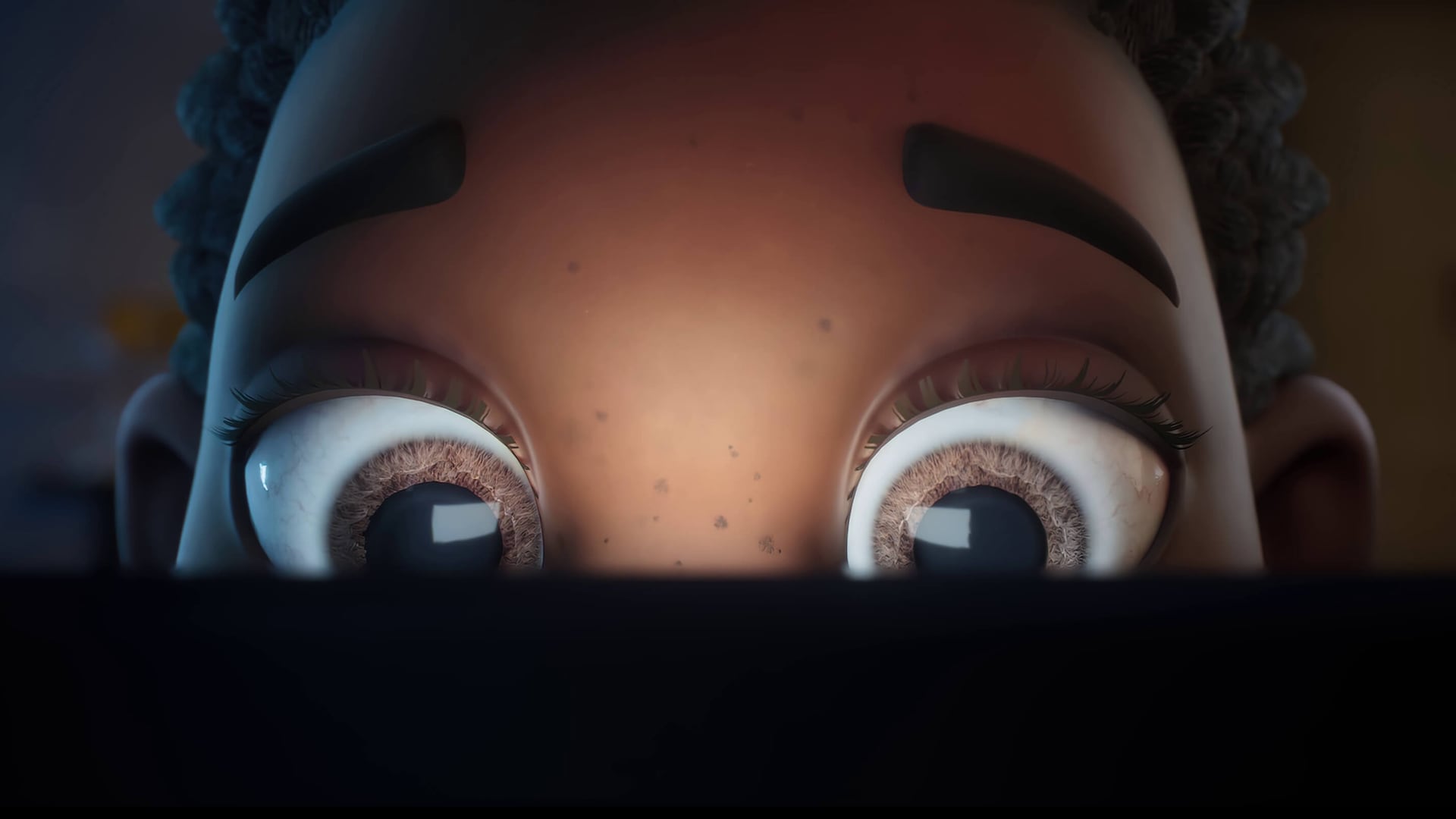 Image courtesy of Preymaker LLC
One of the big benefits of the way the character was designed was the ability to scrub through a fully animated shot in Unreal Engine and play back fully fleshed-out and lit sequences. The Preymaker team also developed in-house tools to bring an Edit Decision List (EDL) into Unreal Engine. This seamlessly compiled all of the animation clips, connected them to the skeletal mesh of Jules and placed everything within the Sequencer with the correct time code.

Blue was created over the course of 8 months by a team of around 20 animators, modelers, FX and Unreal Engine artists. And while the entire animation team was based in South Africa, Angus and Rob could hold daily Zoom-based animation reviews with them, using ShotGrid to ensure a seamless project management workflow. “It is remarkable to think that there was never a time where our  team was in the same room working together on the project,” says Rob. “Every single aspect and component was done remotely, which even three years ago would not seem possible.”

With a background in traditional 3D animation, the team had to learn how to work in Unreal Engine during production. With a small team of five working directly in Unreal Engine, just three of that team lit and laid out all the shots. “It was a case of taking more than 200 shots and dividing them between us, and lighting in Unreal as well as doing all the layout for each scene,” says Rob. “This made the decision to have no compositing in the entire process crucial to being able to finish the project.” 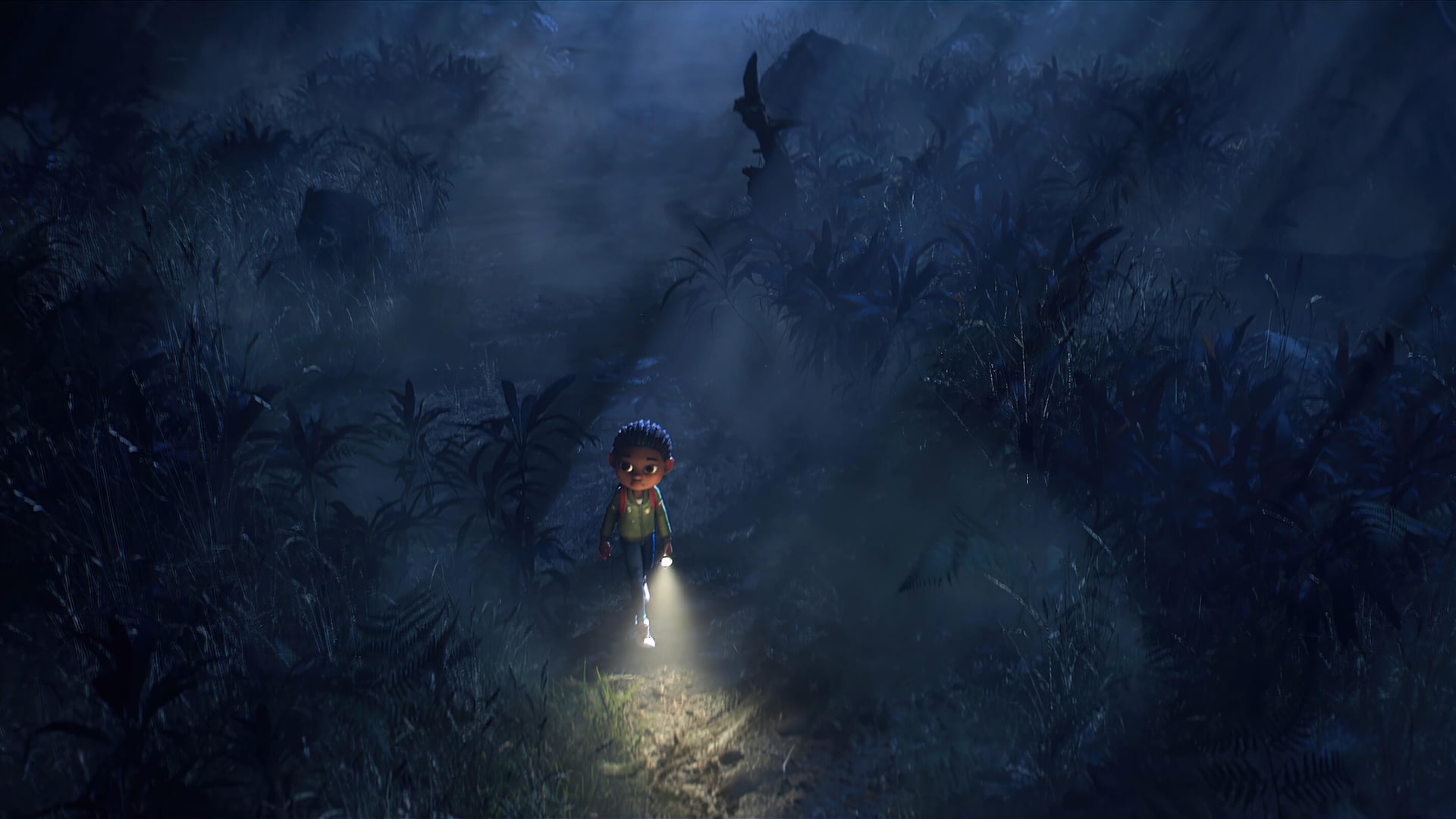 The Unreal Engine-based workflow on Blue proved to be revolutionary compared to the process the team at Preymaker has been working with for the past 21 years. “We wanted to treat this as though we were on a film set in terms of the set build, art direction and lighting,” says Rob. “It felt the closest to a real-world, live-action environment that we’ve ever seen in VFX. It felt no different to being a cinematographer on a production.

“We moved lights around in real time, changed the lenses, set the focal distance and F-stops. That was a game changer in every aspect of the process. No longer were you setting off renders to do first passes and test them. We had the sets in front of our eyes in real-time and could change the mood of a scene in a matter of minutes, not days.”

The ability to apply skills picked up on set from some of the world’s best cinematographers, within Unreal Engine, was a big plus point. “For people who know me,” shares Rob, “patience in production is not my strong point and I loved just being able to try stuff out and get results so quickly.” 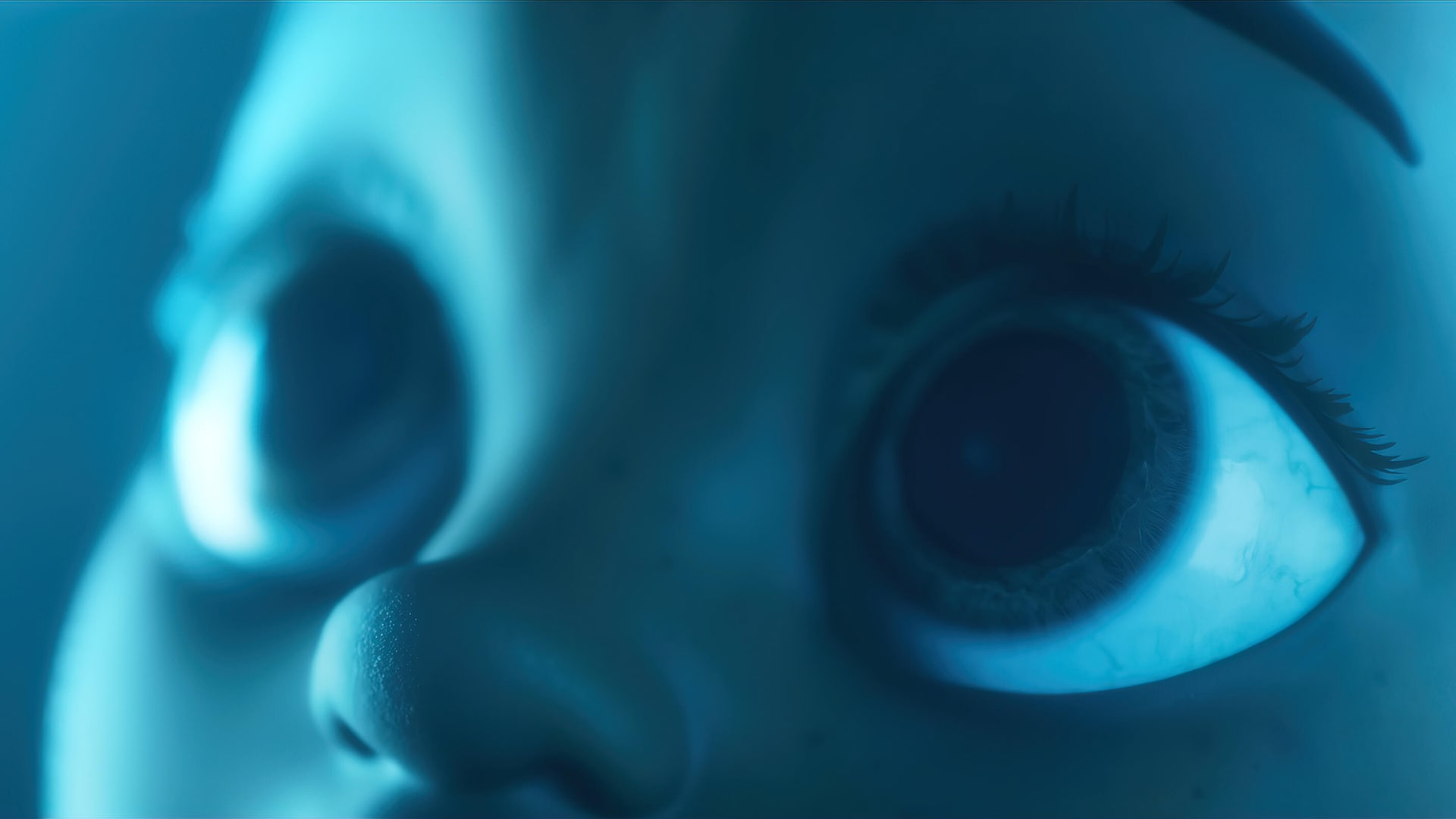 In particular, lighting and layout capabilities are a key part of Unreal Engine’s appeal for Preymaker. “The lighting tools are better than anything we’ve used in any 3D package or renderer,” Rob says. “The way you light scenes within the engine has a natural feel and approach that is the closest to feeling like you’re on a film set.

“Every scene we would unload the lights off the back of the truck, so to speak, wheel them in and adjust according to our subject. The ability to scrub back and forth the animation in real time, with all the shaders connected, was incredible. We would then put a blue gel over the lights, move a little to hit the side of Jules’ face and get the shot looking exactly how we wanted.” 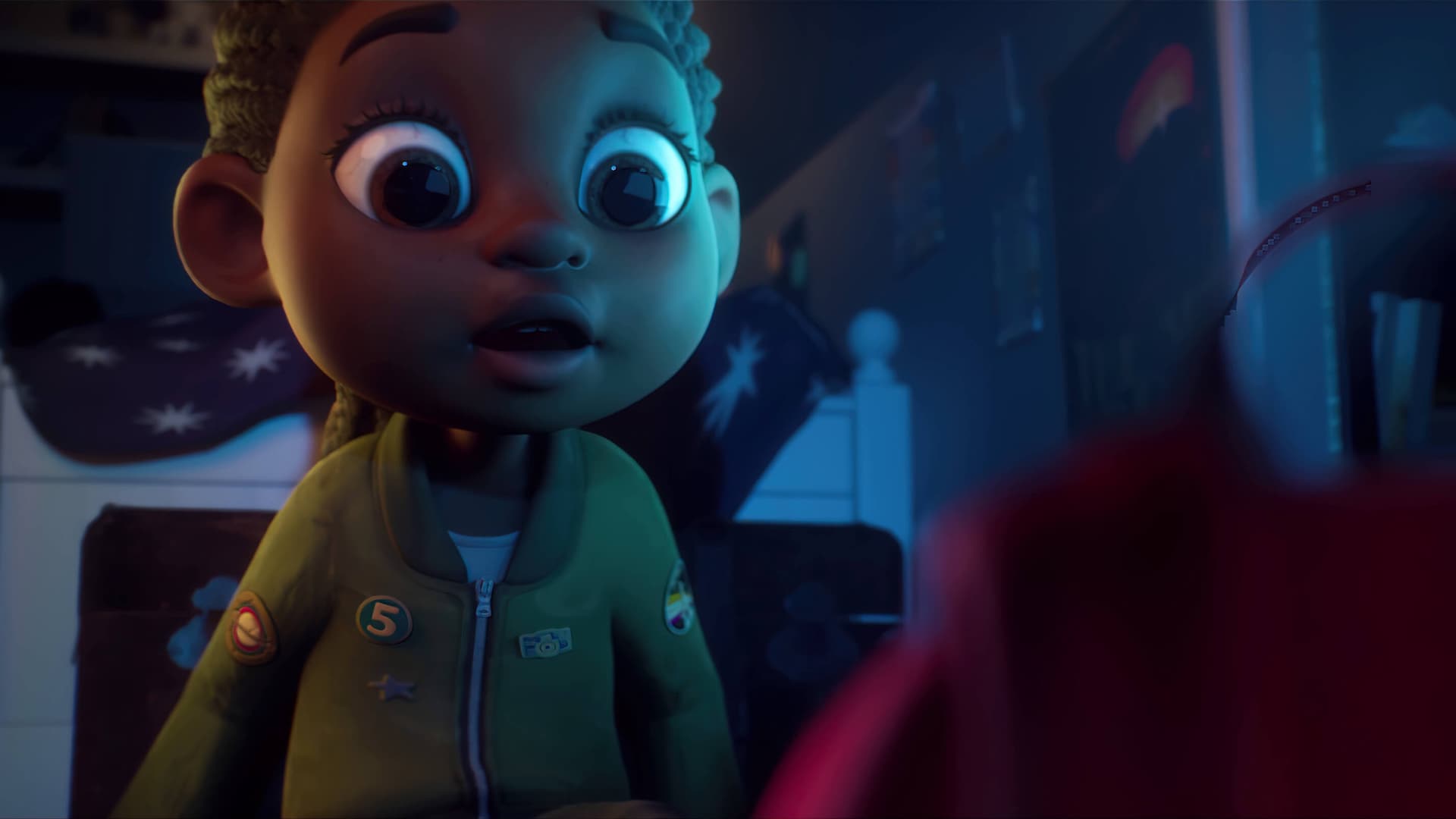 Image courtesy of Preymaker LLC
The set-building aspect of Unreal Engine was also a key part of what makes real-time production revolutionary. The ability to select objects and move them around or remove them from the composition on the fly, was also a huge advantage for the team. Rob says: “Being able to playback whole sequences within the edit was incredible to get a sense of how shots are working and flowing together.”

There’s no doubt that Unreal Engine has changed Preymaker’s production pipeline, and the team continues to learn about using the tool. “Unreal Engine has introduced the notion of using version control software, which presented some challenges when trying to use the engine as a VFX tool,” says Rob.

One of the main hurdles for the team to overcome was getting artists to use this way of working across Perforce. Rob says: “Having all come from a more traditional VFX and animation background, the notion of not having versions took a minute to get our heads around, but as soon as it clicked into place, it became a normal and intuitive process.”

Preymaker continues to work on various creative projects in Unreal Engine, including everything from metaverse experiences to VR games. The team hopes that Blue will eventually be made into a full feature, brought to life by writers and directors who will join Preymaker to authentically reflect the voice of the culture and story of Jules and Blue. 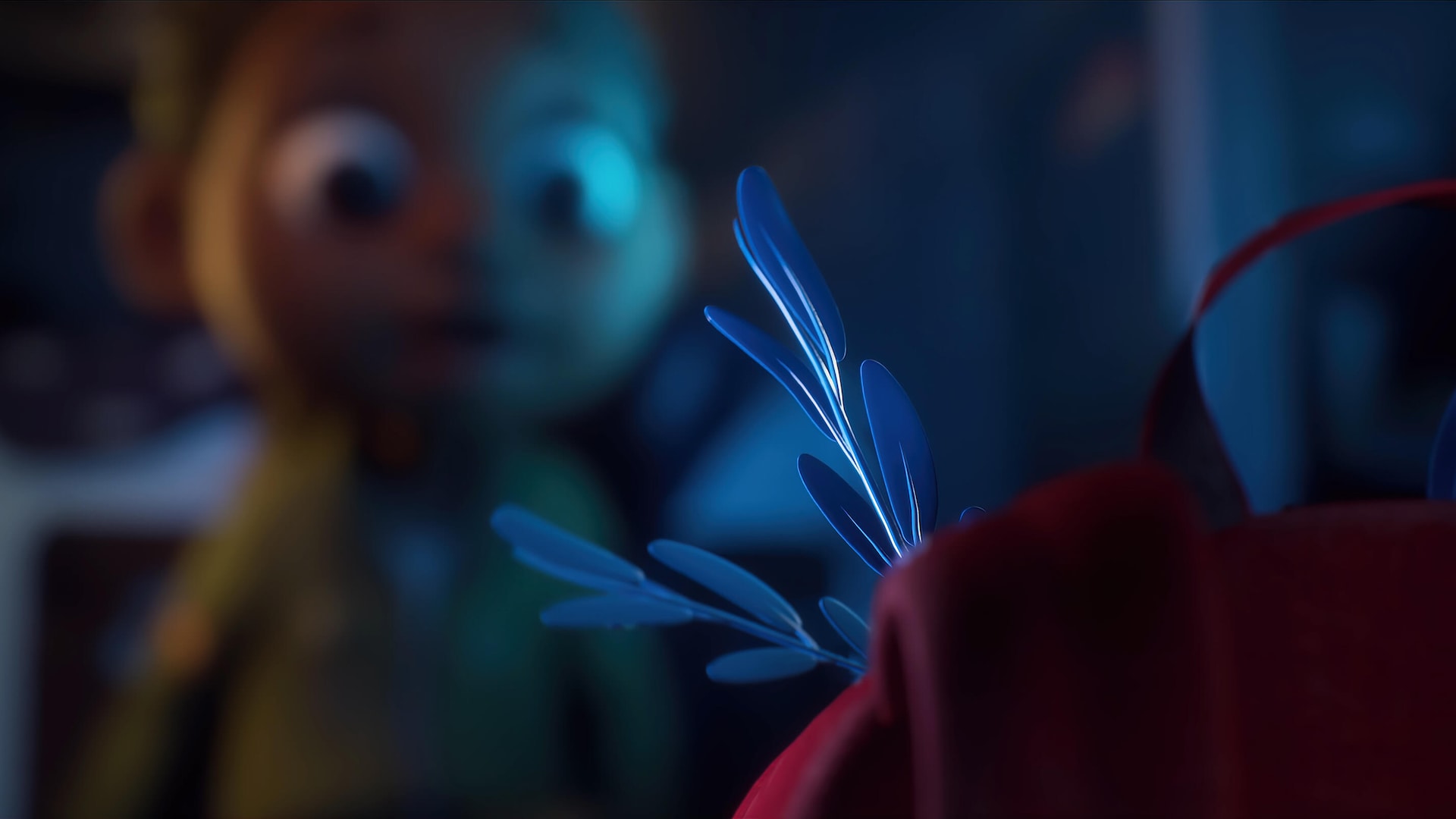 Image courtesy of Preymaker LLC
“Unreal Engine gave Preymaker the ability to do an animation project all in camera; then, it was just a case of exporting the shots to be graded. The next step would be to grade live within Unreal, which we’re excited to explore moving forward.”