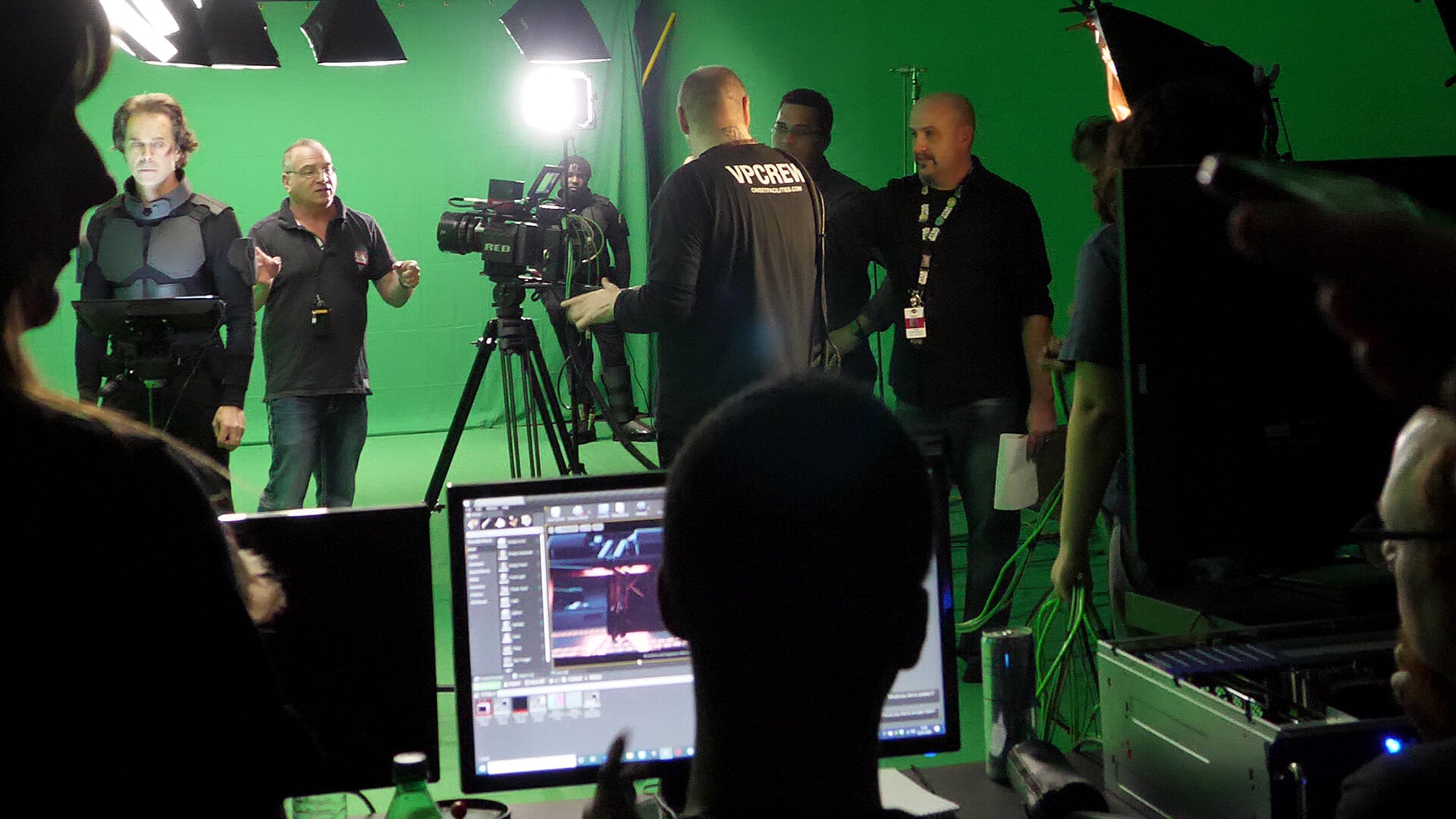 Image courtesy of The DAVE School and On-Set Facilities

Melissa Robinson |
July 29, 2020
Education
Features
Film & Television
Game design
Motion Capture
Previs
VR
Virtual Production
Virtual Sets
Visualization
Ideally, education prepares students for careers in their chosen industries. But in a field like visual effects, with its tight deadlines, demand for high quality, and ever-changing technology, a graduating student might not be ready to meet the needs of the industry.

To fill the gap, The DAVE (Digital Animation and Visual Effects) School was founded in 2000. Housed in the backlot of Universal Studios Florida, the school boasts an award-winning faculty and state-of-the-art training program, which includes end-to-end virtual production techniques in a studio environment. Graduates have gone on to jobs at major visual effects companies like Walt Disney Imagineering, Digital Domain, ILM, Marvel, Activision, Blizzard, and many more.

“We’re always thinking about what the future of filmmaking and gaming will look like,” says Jason Embury, Instructor on Real-Time Technologies & Pipelines at The DAVE School. “That future is real-time, and we’re dedicated to making sure our students are ahead of the curve when it comes to being ready to work on those types of projects.”

The school currently offers two tracks—visual effects and game development—each of which makes heavy use of Unreal Engine, both as a learning tool and as a foundational skill set.

The two tracks recently collaborated to produce Deception, a short film developed by the school’s students and faculty using virtual production techniques and Unreal Engine. The point of the exercise wasn’t a finished work, but rather the industry-like experience students would gain from collaborating, iterating, and problem-solving in a studio environment under the same time constraints as a real production.
“The idea behind Deception was to create an IP [intellectual property] the school owned outright, that could become an organic storytelling tool for us to use in student productions,” says Embury. “One of our main goals was replicating the pipeline of a live-action production, so students could really learn how to develop content for modern-day film.”

The school started testing out a virtual production pipeline in late 2019 and soon realized that they could pull off a short film with the equipment and knowledge at hand.

By December, the film was in planning for an eight-week production schedule. When classes started in January 2020, the script was done, the actors were on board, and the production crew, which included students from the entire school, had grown to over 50 people. “The collaboration between our different courses was phenomenal,” says Embury. “Our final semester classes did an amazing job of adapting and taking the initiative to solve many of the pipeline problems that arose.” 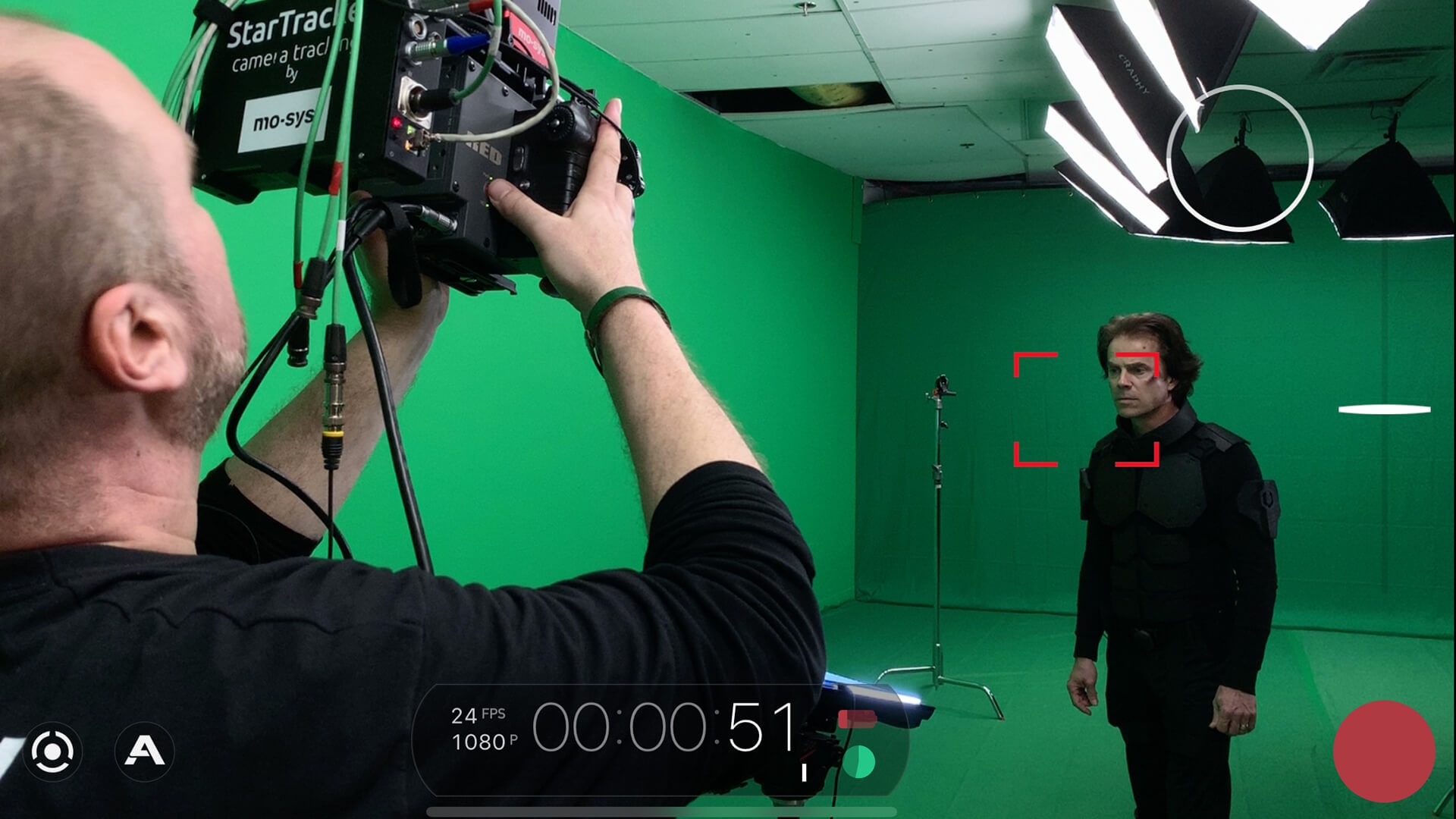 Image courtesy of The DAVE School and On-Set Facilities
To take the students’ experience to the next level, Jon Gress, Academic Director at The DAVE School, called upon his good friend Asa Bailey, an expert virtual production director. Bailey and his team at On-Set Facilities UK collaborated on the project to give students an up-close view of how cutting-edge technology is used in virtual production.

Gress explains, “Asa and his team are truly on the bleeding edge of virtual production. Giving our students the opportunity to work with one of the best virtual production directors and crews in the world was an amazing experience for everyone.”

The team reviewed footage daily with students and did weekly screenings in the school’s theater to show everyone what the work-in-progress looked like on the big screen.

“The sheer amount of work we were trying to produce in an eight-week timeframe would not have been possible without utilizing Unreal Engine as a render engine for 90% of our project,” says Embury. “We were able to iterate on renders and update composites daily, sometimes multiple times in the same day. We created over eight minutes of footage in eight weeks, and probably rendered close to 100K frames in that span.”

“In a motion picture visual effects pipeline, we don’t need to hit 90 fps,” says Gress. “Being able to hit even just 1 fps is like a dream come true for artists used to 15-minute-per-frame renders.”

After this success, the school ramped up its investment into VR with 15 new headsets for the school to allow a much broader involvement for all classes.


Learning in a studio environment

The key to The DAVE School’s successful programs is that they’re designed to emulate a studio environment. Classrooms are laid out like game/VFX studios; instructors are industry veterans; and the curricula are based on studio pipelines, industry expectations, and studio practices.

In addition to its experienced faculty, many of whom are members of the Visual Effects Society, The DAVE School hosts frequent industry guest speakers from a variety of companies including Pixar, Digital Domain, The Mill, Pixomondo, Dreamworks, Stargate Studios, and Epic Games. 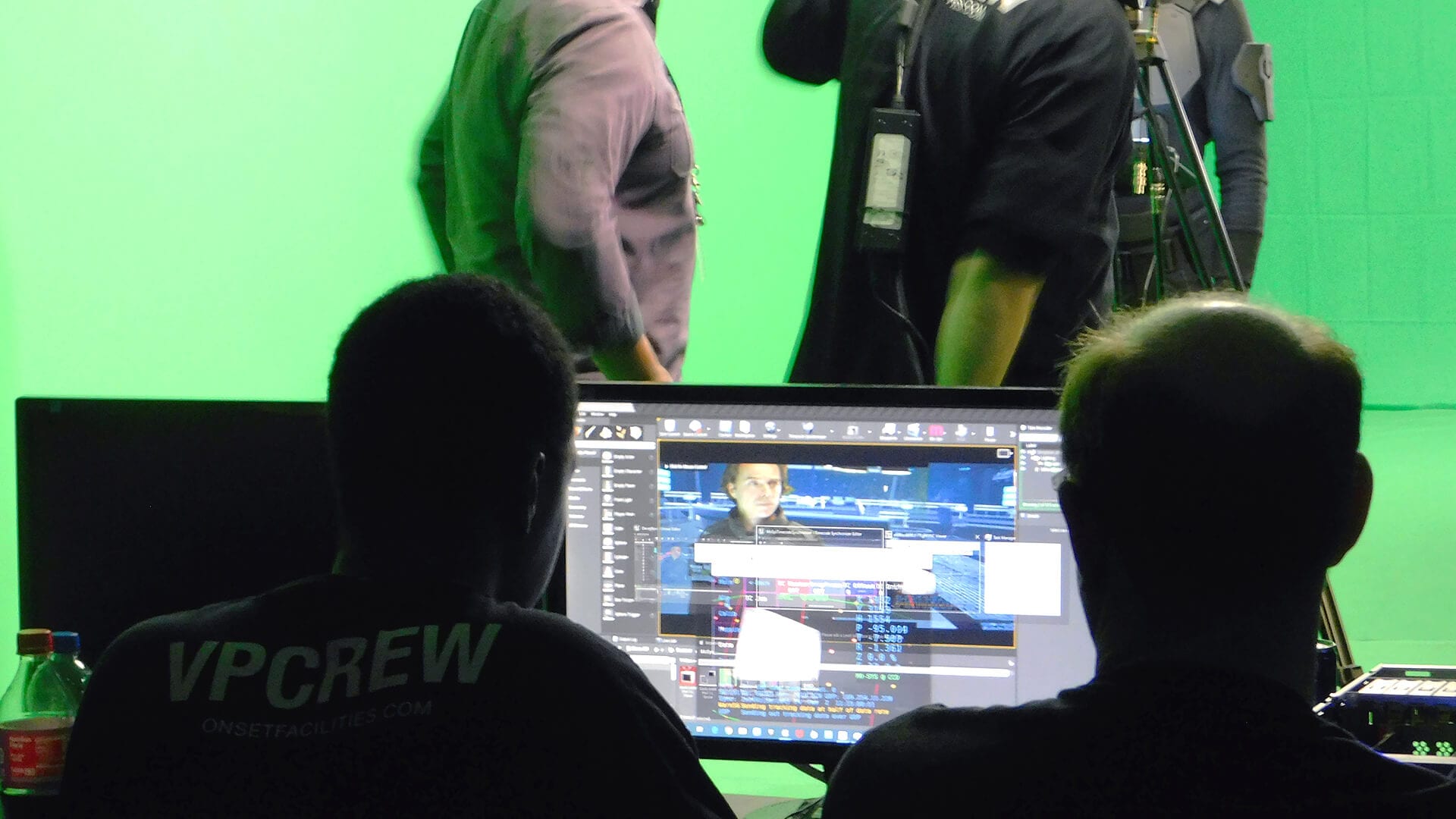 Image courtesy of The DAVE School and On-Set Facilities
The common thread in everything they do, Gress says, is preparing students for an industry job from the moment of graduation. For example, classes run year-round, Monday through Friday, six hours a day, with students learning, creating, and working on projects. “Everything about our school replicates what a student will encounter in their career after the school, from pre-production and dailies to crunch time and deadlines,” he says.

In fact, graduating students often say that their first day at work was just like another day at school. As a result, they are able to quickly adapt and contribute, often leading to a promotion shortly after being hired. Gress credits The DAVE School’s studio environment with preparing students to succeed at this pace.

In 2010, seeing the direction the industry was taking, The DAVE School’s faculty started including training on real-time pipelines using Unreal Engine, and eventually integrated Unreal Engine 4 into the curriculum.

In 2010, while Gress was experimenting with Epic’s Unreal Developer Kit (UDK), he recognized the potential of real-time rendering as an industry-shifting technology for production. This led to an experimental pilot program teaching UDK 3 for production and previs. 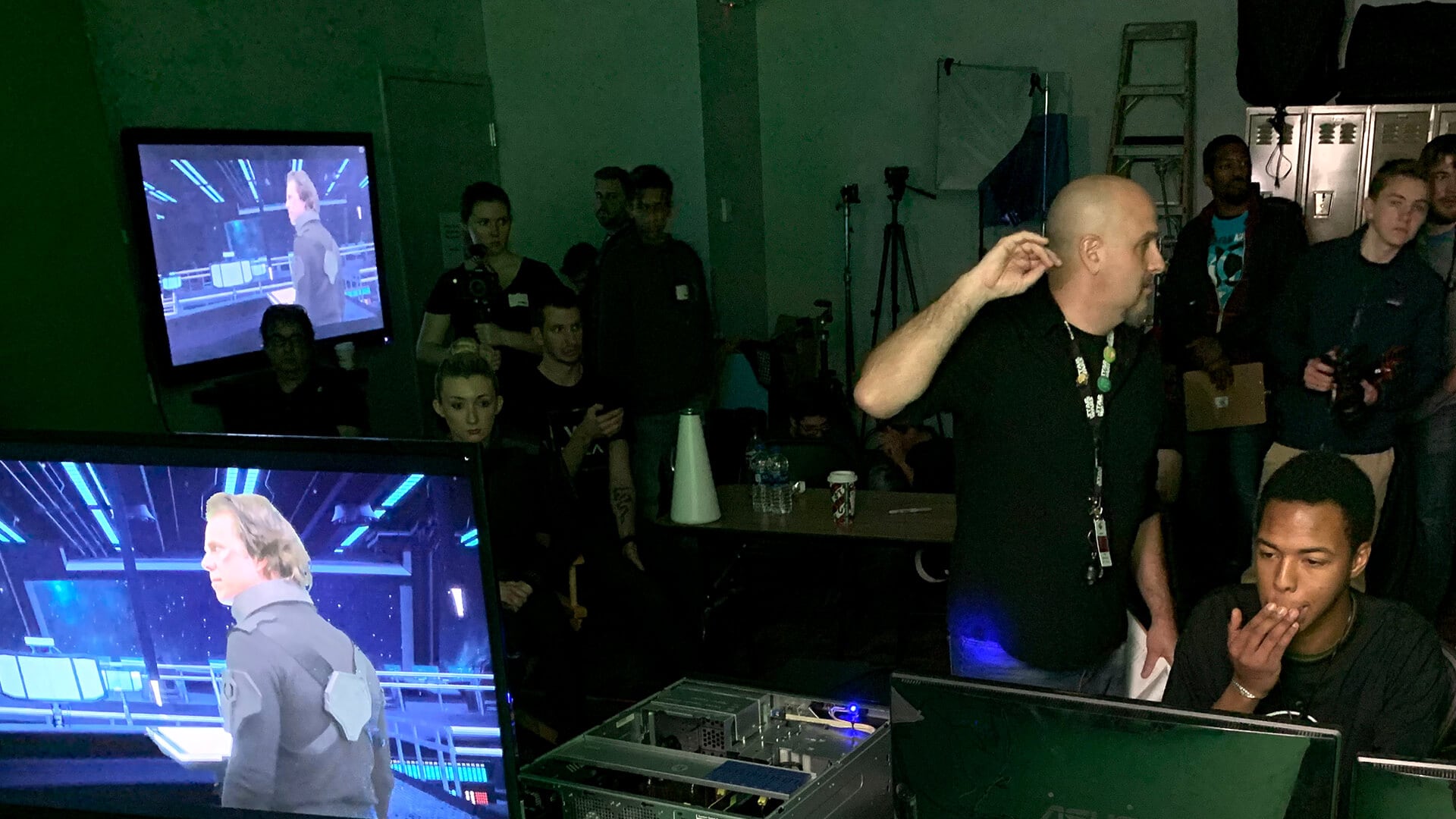 Image courtesy of The DAVE School and On-Set Facilities
“In the world of motion picture visual effects and 3D animation, render times are one of the most costly aspects,” he explains. “We’ve been working on real-time virtual production since 2012, beginning with previs, integration of green screen, motion capture, and motion control.”

The game production track has now moved entirely to Unreal Engine, and the VFX track learns Unreal Engine in their core courses as part of a true virtual production education.

“We incorporate the engine into our very first foundation of modeling class at the school, showing all incoming students how to bring models into the engine and do rudimentary layout,” says Embury. The students then learn how to import character animation and set it up on a skeletal mesh. The Look Dev class also utilizes the lighting and materials in Unreal Engine, giving students instant feedback on their choices.

“One of the best things about Unreal is that it gives our students an avenue to explore every aspect of 3D creation quickly,” says Embury. “Whether they want to become a modeler, a layout or lighting artist, an animator, or a tech artist, Unreal gives students the ability to flex those creative muscles. They can explore more, and worry less about failure.”

Embury adds that with the integration of Unreal Engine into the VFX curriculum, there’s a degree of convergence between the game dev and VFX tracks in the students’ early courses—for example, the processes for model import, animation import, and look dev in Unreal Engine are pretty much the same for both industries, leading to a strong cross-discipline education.

“With the advent of real-time technology on set,” Embury says, “everyone is becoming a larger part of the filmmaking process again.” 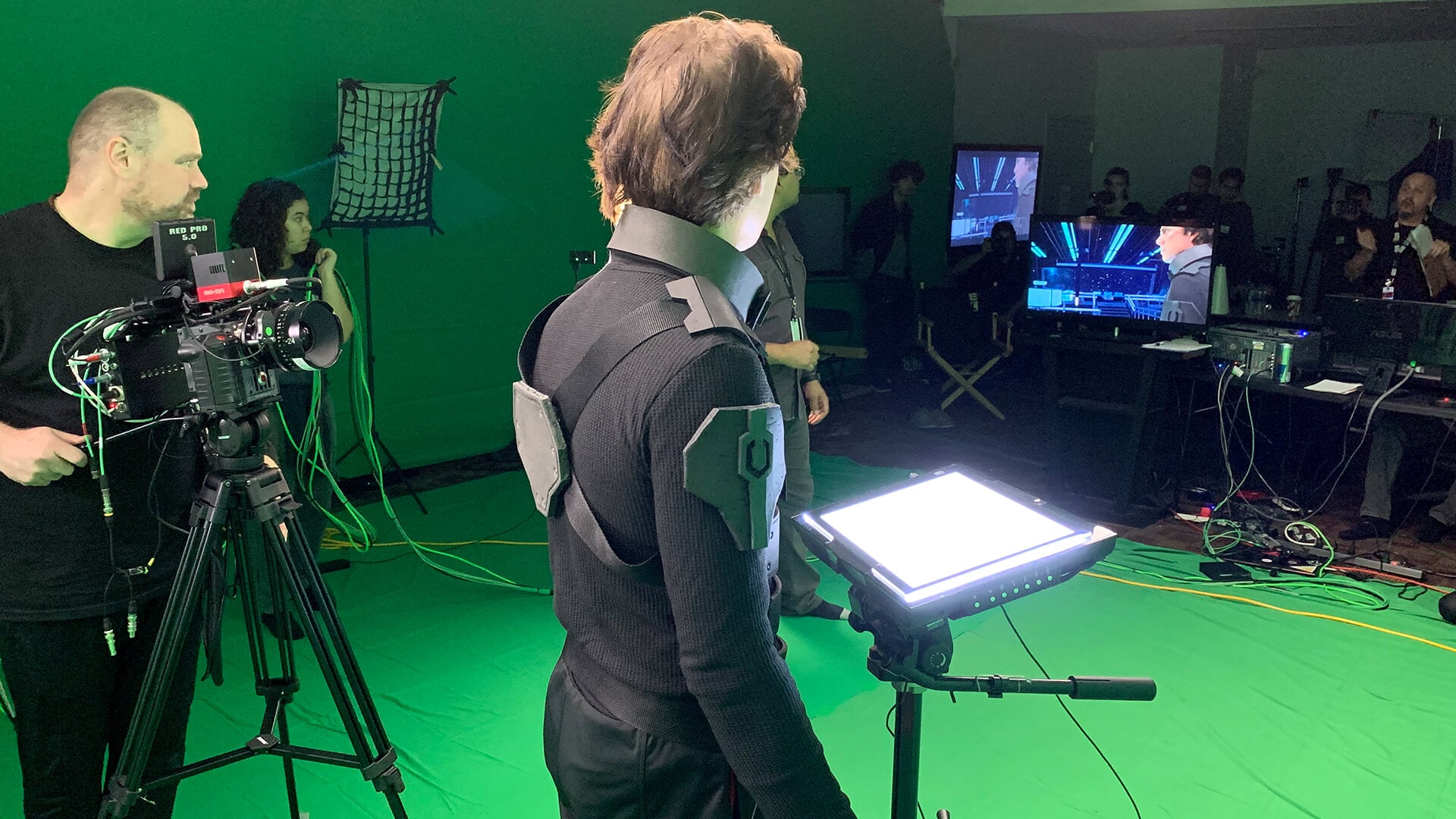 Image courtesy of The DAVE School and On-Set Facilities

Unreal Engine and the future

Embury says the school chose Unreal Engine as a real-time platform for its strong feature set and rich visuals. His favorite features include the PBR (physically based rendering) material system and Unreal Engine’s lighting tools. “Accurately portraying lighting, and how it interacts with the real world, is the key to creating dynamic games and VFX content in real-time,” he says. “Being able to change and iterate on those things with ease while on set, or working on a group project, is incredible.”

As for Gress, he appreciates Unreal Engine’s flexibility in accommodating so many types of projects. “We love its extensibility into everything from motion picture and visual effects previs and production, to architectural visualization and VR and immersive experiences,” he says.

Gress adds that real-time technology is helping the school develop remote solutions for their programs, as well as explore possibilities for remote production.

“When many studios are now looking for ways to scale production up again under vastly different conditions, remote work will be something that students will need to understand better moving forward,” he says. “We want to empower them with the tools to adapt to a variety of pipelines, including remote ones.”

Embury considers that more schools could benefit from offering real-time learning processes and virtual production techniques as part of their curricula. “Start with a concept that will allow you to leverage real-time technology to its fullest potential, and then take the leap,” he says. “The best way to learn is to actually go through the process. There will be plenty of hurdles, just like with every other production, but what’s important is being able to show students how to adapt and pivot to solve problems in real-time.

“The more you can iterate on your work, the better,” he continues. “Real-time technologies are opening the doors to a multitude of industries that 3D artists normally wouldn’t have considered as viable options coming out of school.”

Gress concurs. “Real-time is a game changer,” he says. “It’s changed not only the way our students learn but what they learn to prepare them for their careers.”

Are you prepared for the jobs of the future?

The Creator’s Field Guide to Emerging Careers in Interactive 3D will help you understand what it takes to build a workforce for an immersive world.
Learn moreDownload the guide