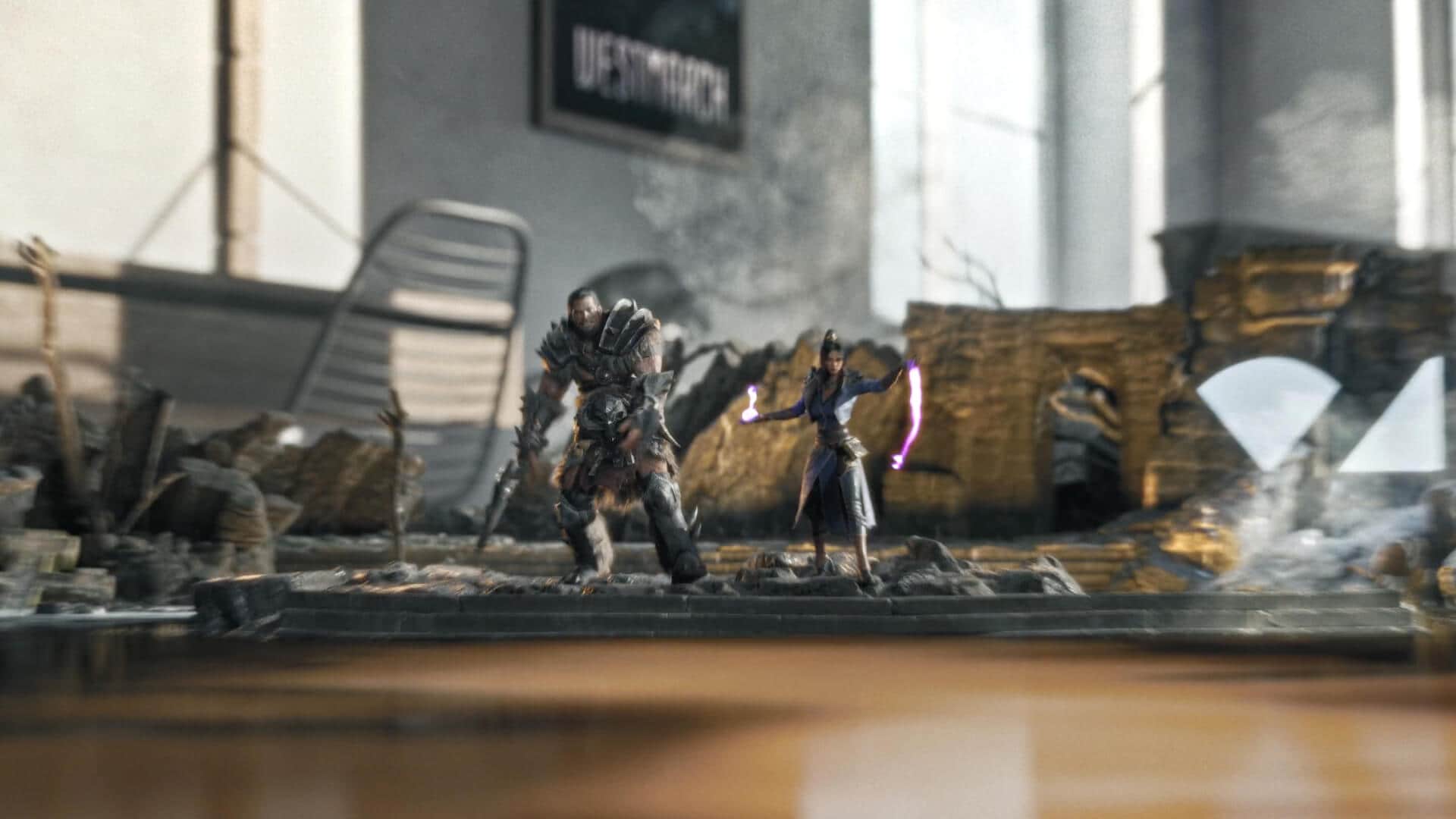 June 29, 2022
Advertising
Animation
Animation
Diablo Immortal
Film & Television
Impossible Objects
Previs
Virtual Production
Virtual Sets
Two demons materialize from a ring of fire. The wizard and the barbarian draw their weapons and charge: the battle is on. Cue impressive spinning axe strikes and magical fireballs. Just as it looks like our heroic duo are gaining the upper hand, the Lord of Terror appears, towering above them and wreathed in flames. So far, so Diablo. The camera pans out however, and we see this epic battle is taking place in miniature—on the screen of a mobile phone.
It’s a clever and captivating way of advertising that the first Diablo made for mobile has arrived. To bring the concept of Battle at Home Screen to life, virtual production studio Impossible Objects employed a range of cutting-edge filmmaking techniques, including producing virtual environments, 3D assets, real-time previsualization, a hybrid live-action shoot, and intricate animation sequences.

Impressively, the team never moved out of Unreal Engine, producing the initial layer in previs, picture locking, and then migrating to final pixels. This real-time approach enabled them to slash the project timescale from six months to around three.

Setting up a virtual production studio

Joe Sill is a director and storyteller, first and foremost. Telling grand, imaginative stories and building worlds has always been his passion—but he’s fascinated by exactly how one can engineer an image or moment that is impossible to create in real life.

Formed in early 2021, Impossible Objects has been leveraging Unreal Engine since the studio’s inception. “The moment we all realized that through Unreal, building imaginative and grand worlds was no longer a restrictive process for filmmakers, we knew it was time to leave our traditional means of filmmaking behind,” says Sill.
Jerad Anderson is another of Impossible Objects’ co-founders. He tinkered with computers from a very young age, starting back when the internet was text-based. Anderson serves as Executive Producer at Impossible Objects. “We had known about Unreal Engine as a tool in the world of video game production, but quickly began to see the evolution of it as a photoreal cinematic tool for film production,” says Anderson. “We talked about testing it out and Joe dove in head first. Some of the tests he began to generate were breathtaking. It was then that we knew this was the future.” 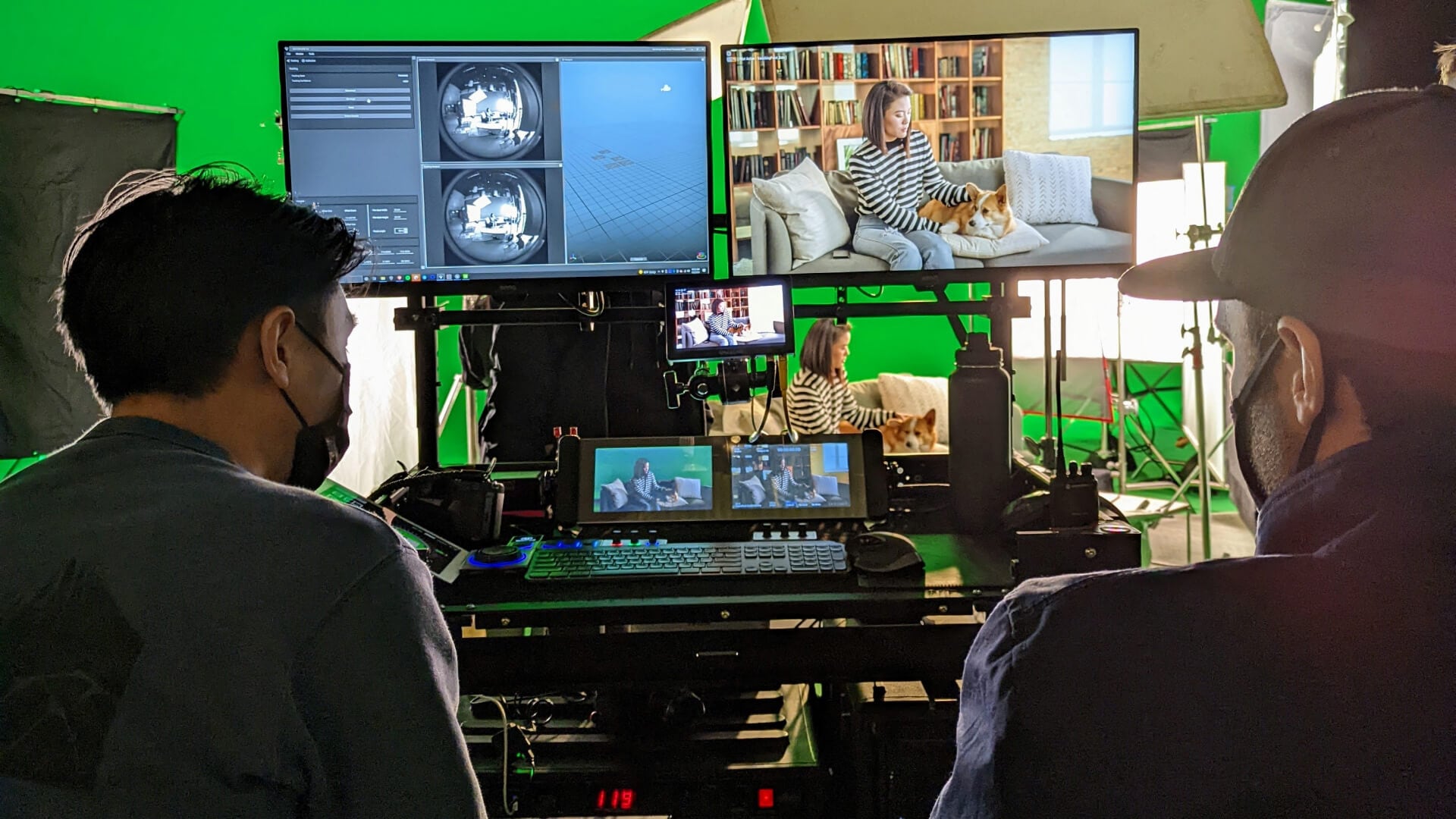 Virtual production and a live-action shoot

Impossible Objects was responsible for the entire production of Battle at Home Screen from start to finish, working alongside ad agency Omelet as well as the teams at Google and Diablo. The studio was intent on doing as much of the work as possible in Unreal Engine. “By using Unreal Engine, we took the film from start to finish in a manner that was more efficient and more creatively satisfying than any of us could have anticipated,” says Sill.

The film follows key hero and villain characters from the Diablo Immortal game as they’re summoned from inside a Google Pixel to engage in an epic battle—on the surface of a coffee table. 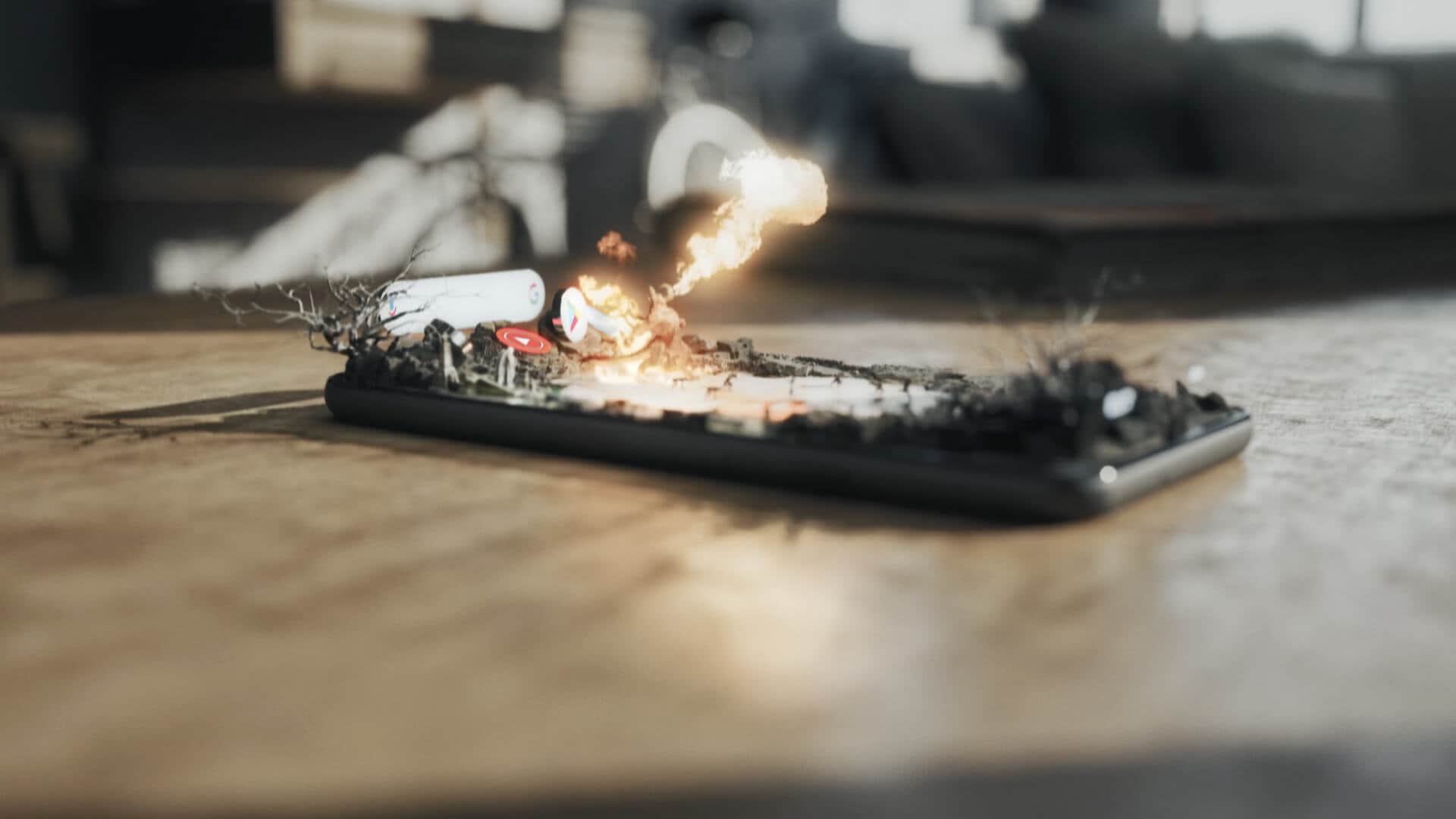 Image courtesy of Impossible Objects
The team also had to show the perspective of the live-action hero as she walks into her living room and catches a glimpse of this outlandish situation. “Home Screen needed to be both larger and smaller than life at the same time,” says Sill. “We needed to craft intentional action sequences with precise camera movements and epic fight choreography, and using Unreal allowed us to be highly iterative and able to manifest the best creative decisions possible.”

The job of defining how all this was going to come together from a pipeline perspective fell to Luc Delamare. As Head of Technology at Impossible Objects, he oversees the implementation of new pipelines on all productions. “I consider myself a ‘VP DP’, as I operate both as a visualization lead in-engine, but also as a DP for some of our productions requiring LED volume and hybrid workflows,” explains Delamare.

On Home Screen, Delamare and his team chose to combine hybrid virtual production, shooting live-action talent on a green screen, with fully in-engine visualization and animation. 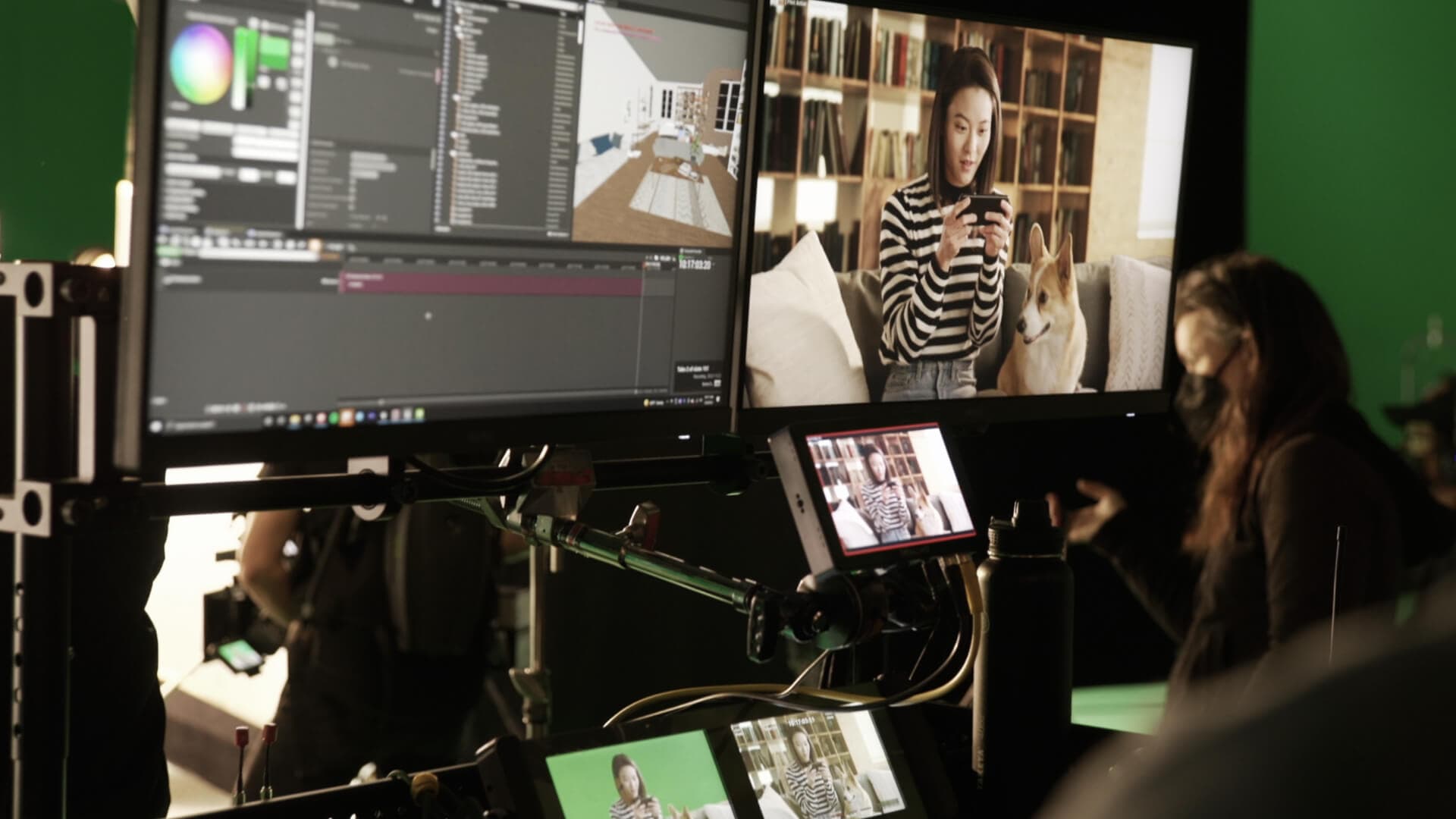 Image courtesy of Impossible Objects
Delamare explains that housing the project and environment in Unreal Engine provided a powerful combination of real-time performance and visual continuity between all departments, and would also allow for efficient implementation of things like real-time capture for both live-action and CG cameras.

“We were able to keep the visual language of the project consistent through multiple stages in a nonlinear manner,” he says. “What I mean by this is that moving from early previs to final pixel was a very smooth transition, and at no point did we struggle with ‘matching the previs’ as everything was built in the same environment.

“When you add to this fact that our virtual apartment set was also easily ‘borrowed’ for our hybrid live-action shoot—also managed in Unreal—then you really start to see how the nonlinear and real-time aspect of Unreal Engine helps keep creative elements consistent through the entire process.” 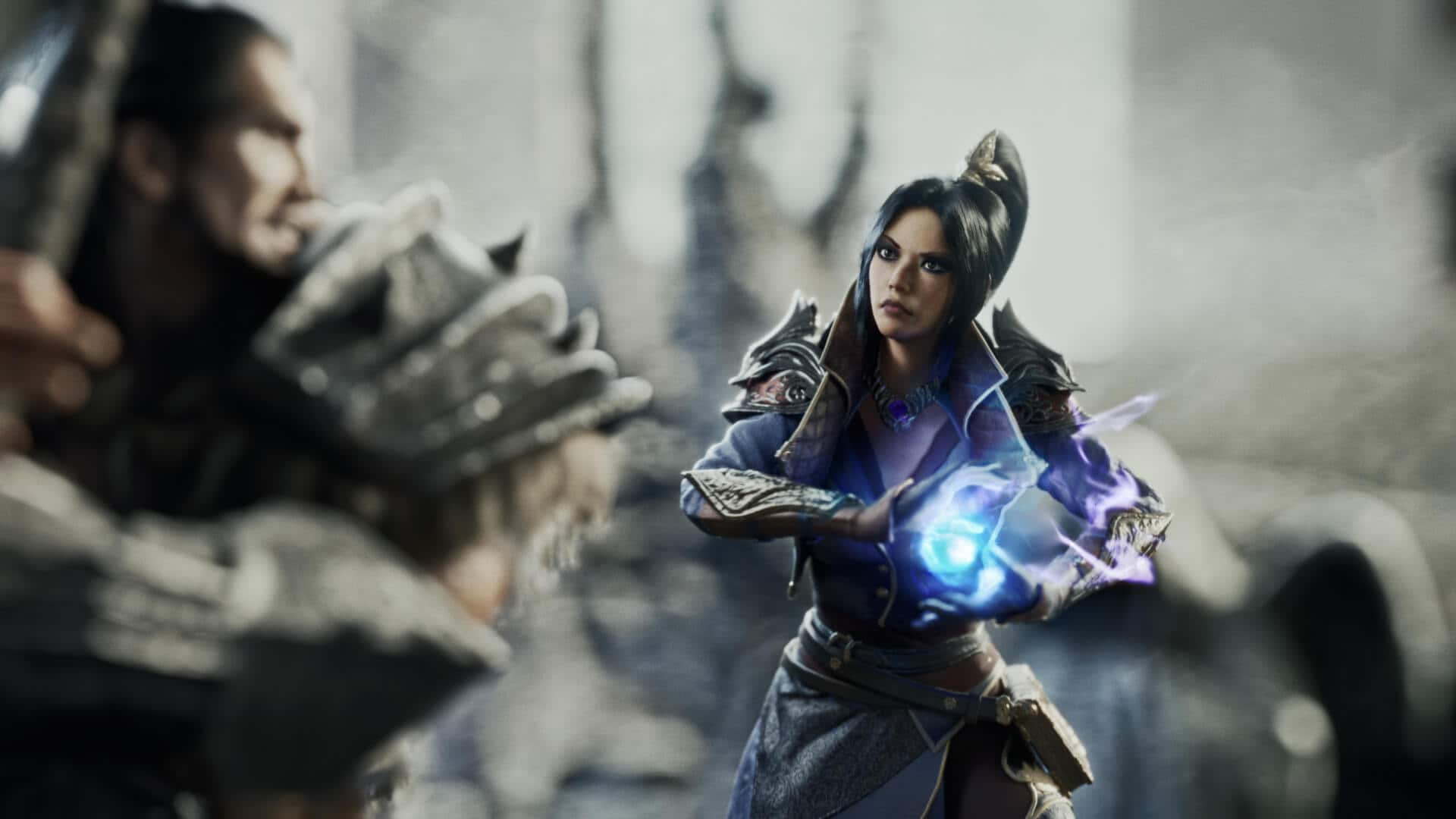 Image courtesy of Impossible Objects
Working in Unreal Engine 4.26 at the time, the team’s animation pipeline was an efficient blend of a traditional workflow and real-time previs in Unreal Engine. Animation was done in Maya, and all dailies were immediately ingested into Unreal Engine and Sequencer for creative review with the rest of the departments.

“It was in this fashion that we embraced a nonlinear nature,” says Delamare. “Notes on animation were made in conjunction with lighting, camera, and the virtual art department, so that a shot as a whole wasn’t necessarily being ‘handed off’ between departments and instead a more wholesome view was achievable. Now in our productions, we’re thrilled to embrace UE5’s control rig tools as well, so that the entire process lives in engine.” 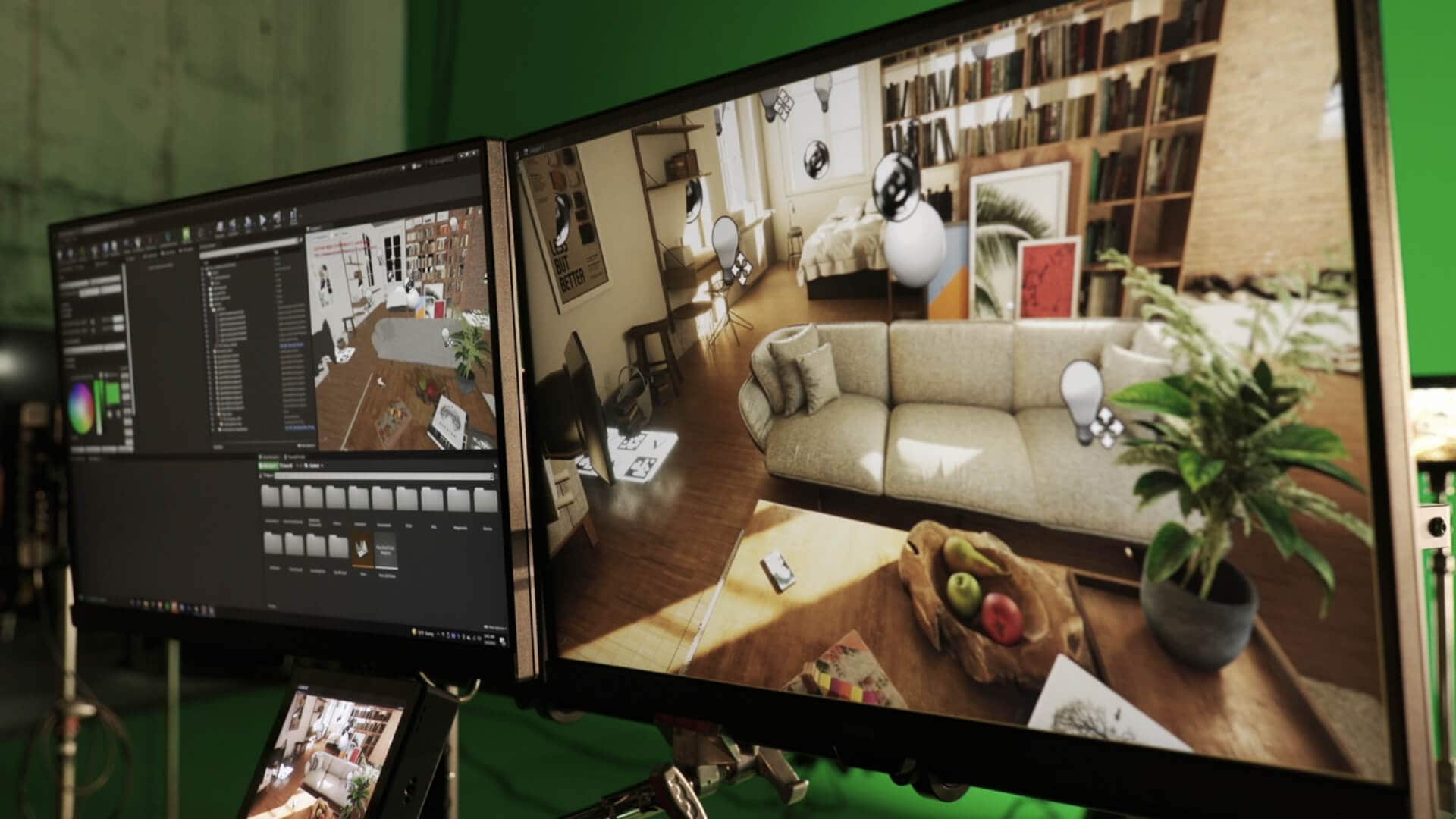 Image courtesy of Impossible Objects
From day one, the Impossible Objects creative team worked directly with the teams at Omelet, Google, and Blizzard to workshop the story through storyboards, breakdowns, and concept art style frames.

They quickly moved into Unreal Engine with their virtual art department (VAD) and previs teams working in tandem to build the world as well as picture lock a previs cut within a matter of weeks. “By using Unreal Engine for previs, we were producing high-fidelity results with a staggering immediacy and quantity,” says Sill.

“Within days, we were providing our crew and client an entire previs cut with a shocking amount of upfront creative data, from camera movement to rough animation blocking, lighting direction, color, and textures.” 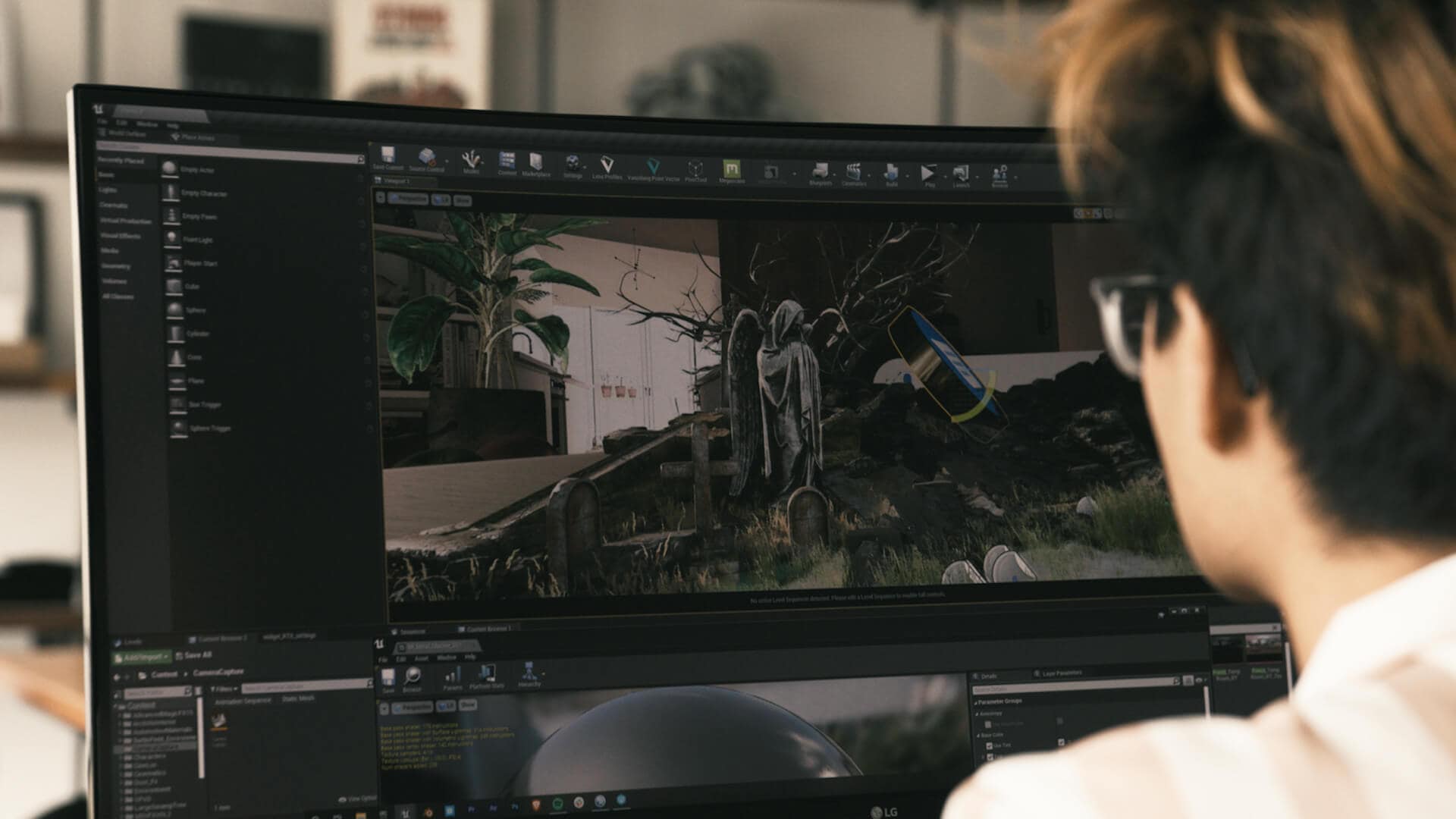 Image courtesy of Impossible Objects
The VAD made sure the environment for the animated action sequence would match identically to the live-action shoot of the human talent. The hybrid live-action aspect of the spot meant they were able to preview their virtual set in real time for the client. Video village, both on set and via remote feed, was only fed the real-time live comp of the scene—so nobody was ever looking at a green screen.

That meant that everyone, from talent to crew and client, was able to fully understand the virtual environment they were all operating in, as opposed to simply imagining it or relying on reference imagery. “But where the potential of this setup really shined is the fact that we could also adjust our virtual set and make instantaneous creative decisions about how we were capturing the moment,” says Sill. “Having that flexibility, while also being able to base our choices off an accurate image of a virtual environment is something that we all enjoyed tremendously.”

The project also saw an innovative early use of a MetaHuman. “Prior to our live-action hybrid shoot, we employed the use of an early access MetaHuman in previs, which was an extremely useful way to accurately plan for and determine how exactly to approach our lighting design that our live-action crew would then implement,” says Sill. 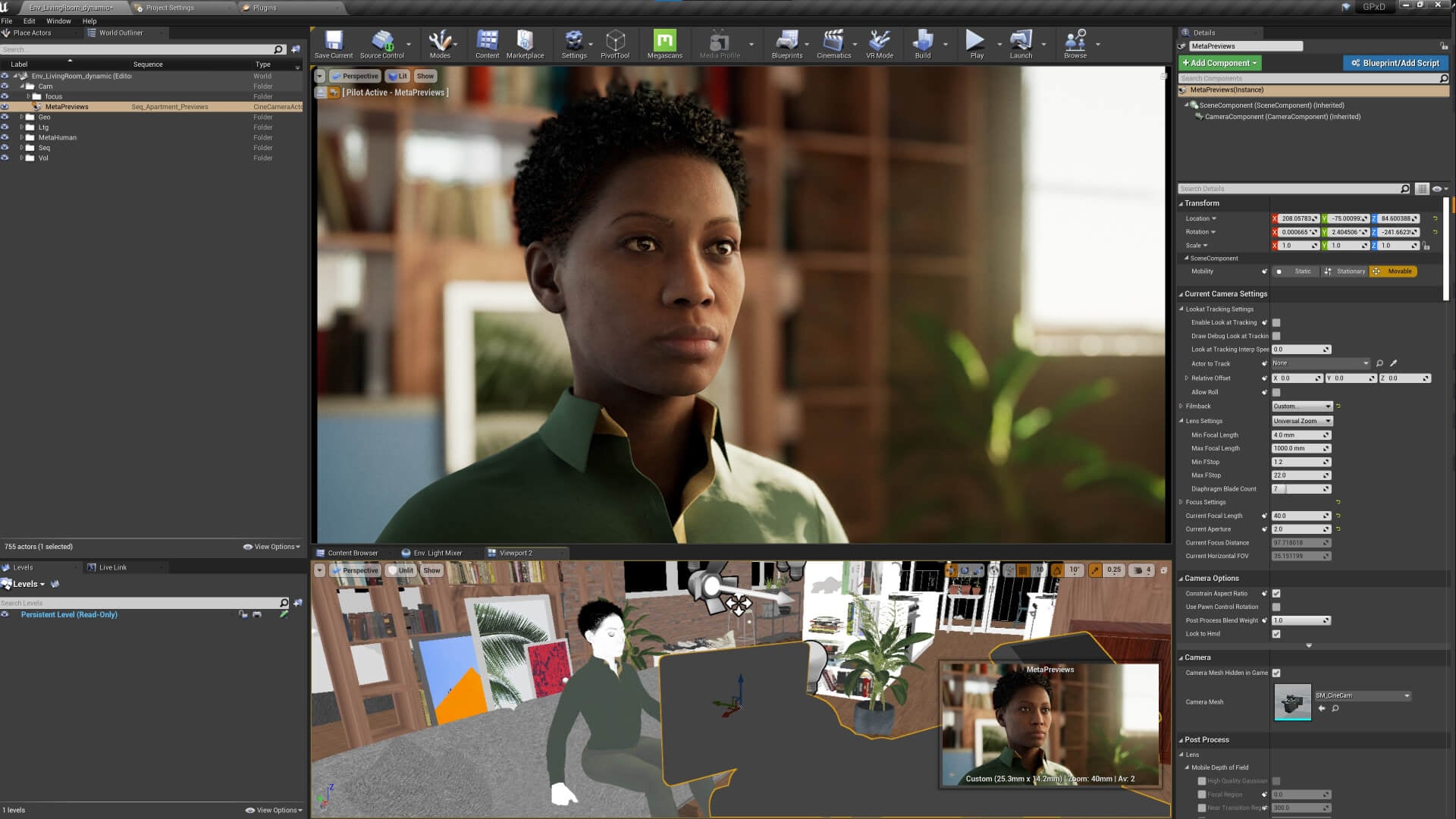 Image courtesy of Impossible Objects
The adoption of a real-time approach also had a notable impact on the project timeline, stemming from the fact that the team could work on so many aspects of the project simultaneously in Unreal Engine. “For example, we had cinematics work in conjunction with animation so that decisions on camera and light were intertwined with decisions on how characters move,” says Delamare. “When you combine the various elements of a fully CG animation pipeline into this nonlinear process, it’s only natural that you begin to save time.” 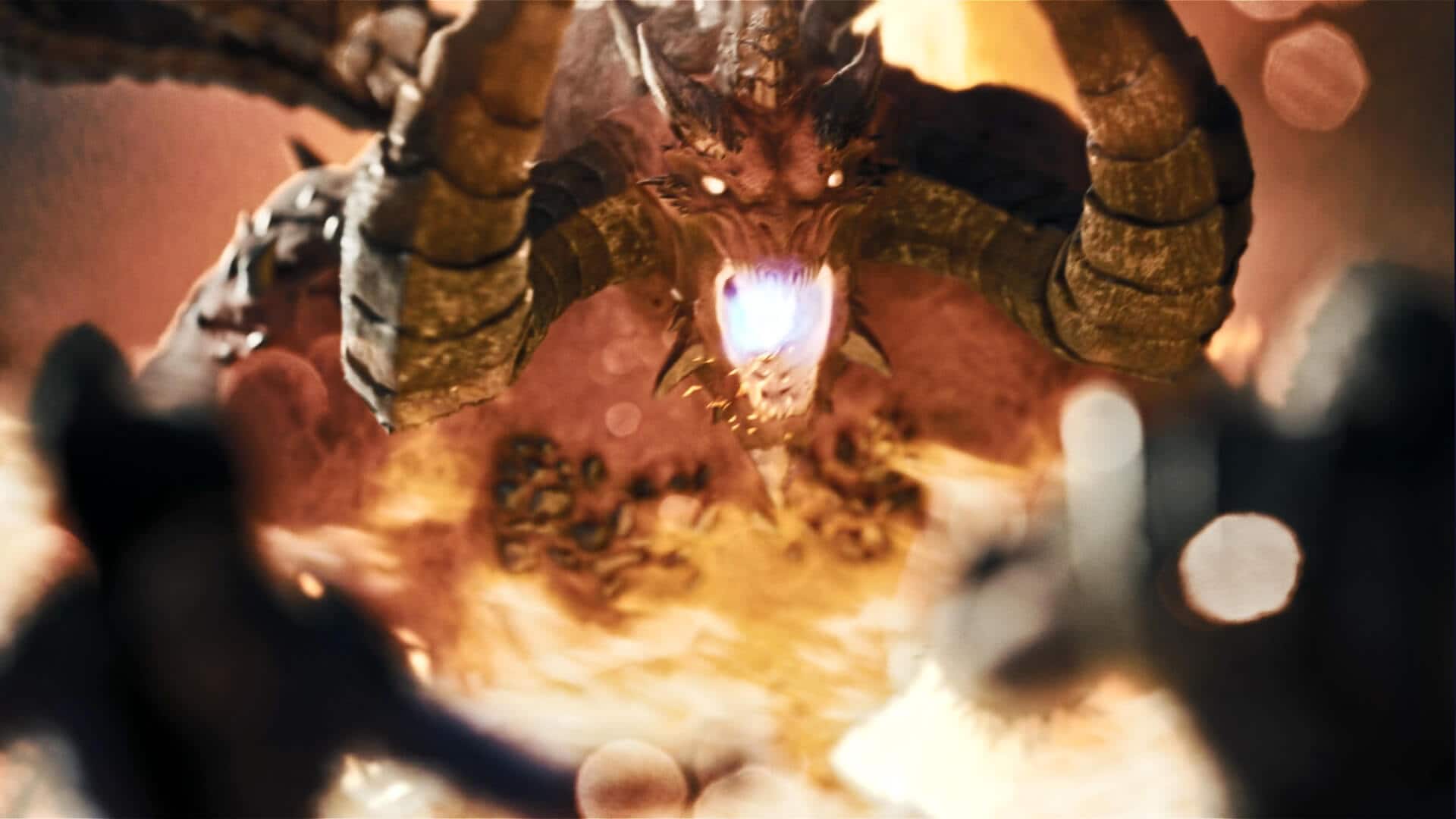 Impossible Objects is building out a roster of filmmakers who will specifically work in virtual production to pioneer new stories. They’ve chosen creatives who have a knack for cinematic storytelling but also have the technical mindset to adopt new toolsets.

Sill believes the Epic Games ecosystem will be integral to the studio’s plans going forward. “From providing libraries of thousands of high-fidelity 3D assets, to intricately customizable MetaHumans and a powerful and accessible game engine, Epic Games has empowered artists and teams to build brave new worlds and explore cutting-edge creative frontiers to build larger stories than we ever thought possible,” he says.

The Impossible Objects team represents this very ethos of creative exploration, built by a community of filmmakers and artists who have come from both the live-action and traditional post-production worlds and have ported over into the burgeoning landscape of virtual production. “The real-time implications of Unreal Engine for both live action as well as CGI are near-infinite, and they were so compelling that for us that there was a point of no return,” says Sill. “We had to explore this new and innovative method of storytelling.”